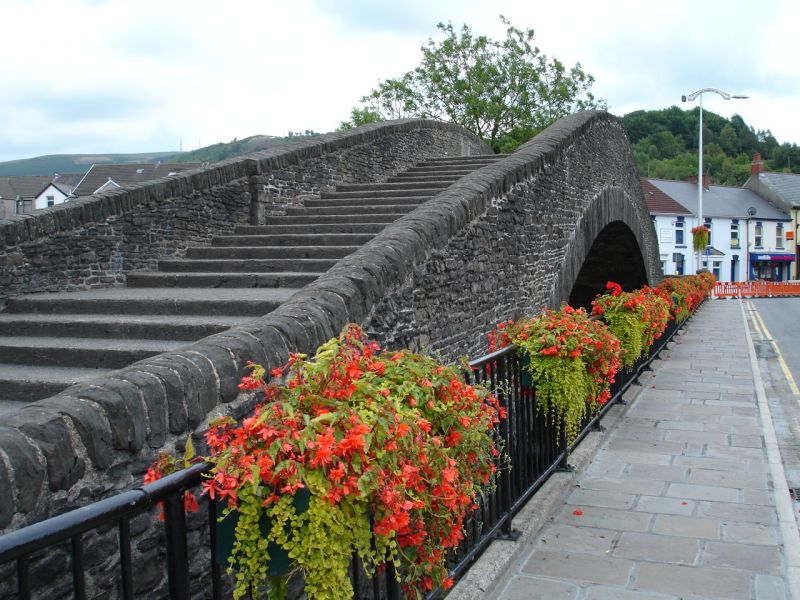 Location: Spanning the River Taff on the N side of the town centre.

Pontypridd Bridge was completed in 1756 and was the last of 4 bridges designed and built in the same place by William Edwards. The first bridge, of 3 arched bays, was begun in 1746 but was swept away two years later. The second bridge, of a single span, collapsed in 1751. Edwards solved the problem of the pressure on an unusually wide arch by piercing the spandrels. This has proved successful and together with its high arch has formed the distinct character of the bridge. For 40 years the bridge was the widest span bridge in Britain (until Sunderland Bridge of 1796) and the widest in stone until London Bridge of 1831.

William Edwards (1719-89) was an Independent minister and a self-taught civil engineer. The Pontypridd bridge is his chief work, although he also built bridges at Usk, Pontardawe, Betws (Glamorgan), Aberavon and Glasbury.

A graceful high-arched bridge with a single span of 42.7m. Of rubble stone, it has stone parapets with plain copings, at the apex of which is a renewed tablet commemorating the efforts of William Edwards and the repair of bridge in 1798 by Edward David and Thomas Evan. The distinct character of the bridge is derived from the 3 circular holes pierced in the spandrels of 2.7m, 1.8m and 0.9m diameter respectively, in ascending order. The deck now has renewed concrete steps. The parapet on the S side is attached to the parapet of the adjacent Victoria Bridge.

Listed grade I as an C18 civil engineering achievement of national British importance.