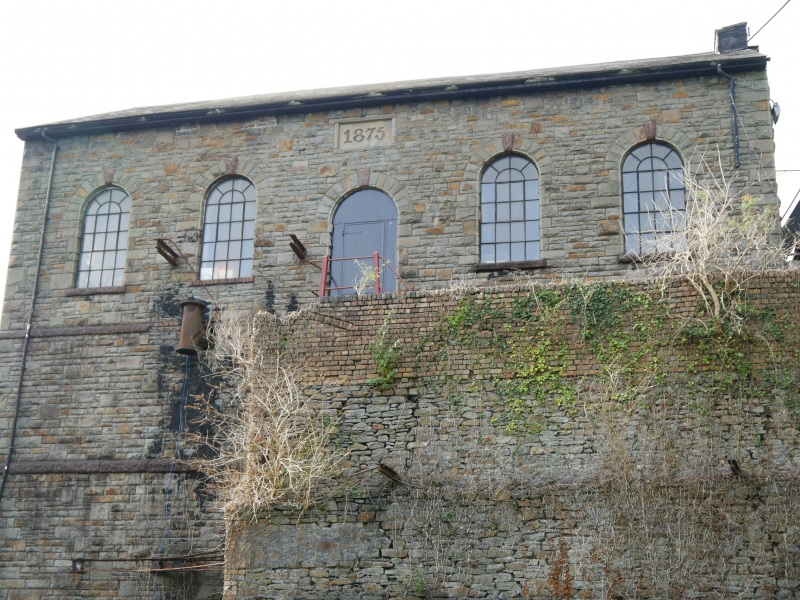 Location: On the W side of Hopkinstown and in a prominent position set high above the main Pontypridd to Rhondda road behind a rubble-stone wall.

Gyfeillion Colliery (later known as Ty Mawr) was sunk in 1848 and its Hetty shaft was sunk by the Great Western Colliery Company in 1875, when the engine house was built (date on building). The engine was supplied by Barker and Cope of Kidsgrove, Staffordshire. Alteration was made in 1902, in conjunction with the replacement of the original wooden headframe with a new steel structure. At this time the cylinders were replaced by Worsley Mesnes of Wigan to a pair of 36 inch (0.9m) cylinders with 6 feet (1.8m) stroke. New steel winding drums were also installed because round steel rope replaced the earlier flat steel ropes. The engine raised coal from a depth of 360m but by 1923 the seams were worked out. Subsequently the Hetty was used as an emergency shaft for Ty Mawr and Lewis Merthyr collieries and the engine, kept on standby, was converted for use with compressed air. It ceased working in 1983.

A monumental gabled engine house of banded 3-storey height, of snecked rock-faced stone and slate roof. The windows are boarded up but retain iron frames behind, some with addition wood-framed glazing bars. The engine is housed in the upper storey. In the N gable end is a large round-headed opening now blocked. The diagonal feet of the headframe are crudely inserted to the R and L, while the winding ropes enter through the roof. On the L-hand side are 4 round-headed keyed windows with sills and a central doorway reached by external steel walkway over the former boiler house walls, above which is a tablet with the date inscribed. The steam pipe is retained just below the upper plinth on the L side. In the R-hand side wall is a doorway at the L end (formerly a window) and 4 windows, the central of which is lower and was formerly a doorway. In the S gable end, overlooking the road, are 2 round-headed windows in the upper storey and 2 small openings boarded up at the ends just below the band.

At the base is a round-headed through passage at the S end. On the W side to its L is a blocked inserted window with brick surround. On the E side is the former boiler house wall, of rubble stone.

The interior retains a double-cylinder engine by Barker and Cope, modified by Worsley Mesnes, with winding drums. Traces of scribed plaster are retained to the walls. The roof is 5 bays with the trusses hidden behind asbestos panels. Traces of a ribbed ceiling can be seen behind the asbestos.

Listed grade I for its national importance as one of the last colliery engine houses with the engine and headframe surviving in situ. The earliest of the few surviving winding engines used for deep mining in S Wales.