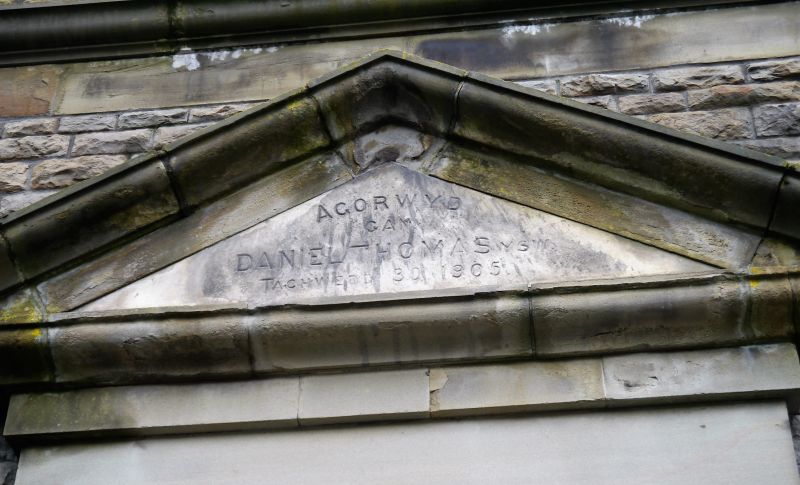 Location: On the main road between Pontypridd and the Rhondda, set back behind forecourt railings.

The first Rhondda Baptist Chapel had been built in 1852, but was replaced by the present building in 1885. The adjoining Sunday school was added in 1905. John Hughes (1873-1932) of Llantwit Fardre composed the well-known hymn tune 'Cwm Rhondda' for an anniversary service at Capel Rhondda in 1907.

Classical style chapel of snecked, rock-faced stone, lighter freestone dressings, and slate roof. The symmetrical 3-bay front has a central doorway under a splayed head with freestone key and floating pediment. Double panel doors incorporate diagonal boarding and are beneath a margin-lit overlight. The outer bays have round-headed doorways with keystones, margin lit overlight to the R side (replaced to the L), and doors similar to the centre. At the upper level is a plain sill band and thin impost band. Three blind arches, wider in the centre, frame round-headed windows in freestone architraves. The central bay has a double pair of windows beneath a tympanum with inscription. The windows have iron-framed glazing (replaced to the L-hand bay). A moulded cornice defines a pediment. This has 3 stepped vents to the centre and round vents to the sides.

Set back at the ends are rounded stair turrets. These have round-headed windows with margin-lit glazing on the L side, and replaced and partly obscured on the R side by the later Sunday school. The turrets are lower than the main chapel and have plain corbel tables. The side walls project slightly from the turrets. The L side wall, of random rubble, is 4-window, all the windows replaced in original openings. These are segmental headed in the lower and round-headed at the upper level, all with stone sills. The R side wall is obscured by the Sunday School, but has a round-headed window upper R similar to the L side wall. The rear is random rubble.

The Sunday school to right is free classical in style, of snecked rock-faced stone with lighter freestone dressings and quoins, and slate roof. The 3-bay front has round-headed windows with keystones to the L and R. A central pedimented doorway has double doors with fielded panels, and small-pane overlight. An inscription to the pediment records its opening in 1905. The quoins are rounded to three-quarter height. The pedimented gable has an inscription tablet. The R side is roughcast, has a brick eaves stack, and a small-pane window in front of the abutting No 1 Chapel Cottages. The rubble-stone rear has plain windows with brick surrounds above a roughcast lean-to.

The vestibule has a coloured-glass panel opposite the main door and half-lit doors to the main chapel. A 3-sided raked gallery has fluted cast iron columns with foliage capitals, and a boarded gallery front. The boarded panel ceiling has a central ornate ceiling rose. The pulpit is replaced and has flanking steps with turned balusters and newels. The baptistery is in front of the pulpit, where the set fawr has been removed. The pews have moulded ends. The large organ behind the pulpit is by Blackett & Howden of Newcastle & Glasgow.

Listed for architectural interest as a late C19 chapel in a prominent location retaining its original character.