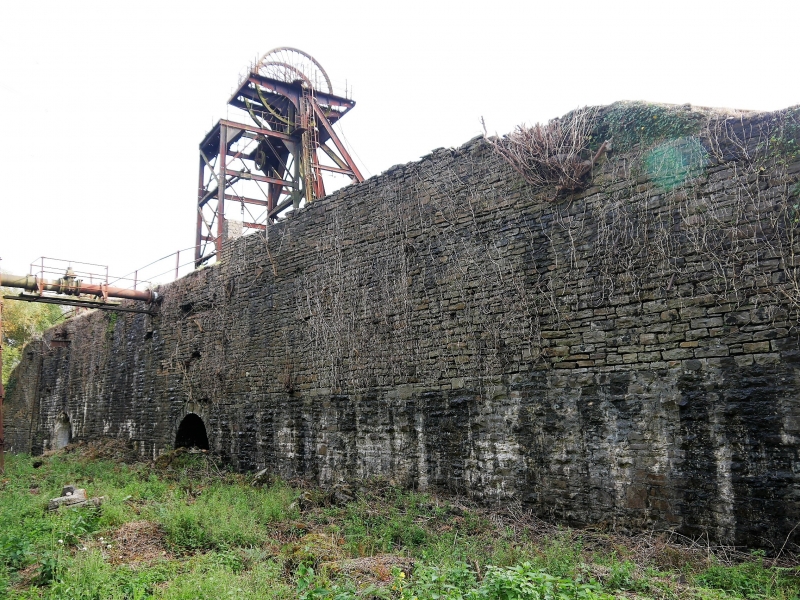 Location: Attached to the N side of the engine house.

Gyfeillion Colliery (later known as Ty Mawr) was sunk in 1848 and its Hetty shaft was sunk by the Great Western Colliery Company in 1875, when the engine house was built (date on building). Coal was raised from a depth of 360m but by 1923 the seams were worked out. Subsequently the Hetty was used as an emergency shaft for Ty Mawr and Lewis Merthyr collieries and the engine, kept on standby, was converted for use with compressed air. The shaft was abandoned in 1983.

The head frame was built in 1902 by Neville of Llanelli to replace the original wooden head frame, in conjunction with which the engine was also modified. The cramped nature of the site, caused by the gradient of the hillside and the proximity of the railway on the N side, resulted in the winding engine being located closer to the headframe and shaft than was customary.

Head frame with rolled steel joists and diagonal legs built into the engine house, with 2 sheaves and steel ropes. A brick base is built around the head of the shaft.

Listed grade I as one of the earliest surviving steel head frame in the S Wales coalfield, and a sight once characteristic of the S Wales valleys, and for group value with the engine and fan houses.