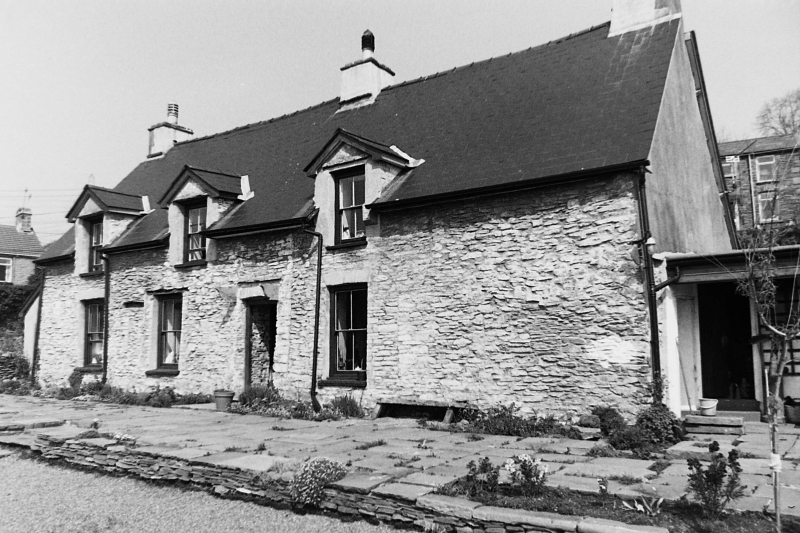 Location: Set into the hillside on the NW side of Hopkinstown, and reached by private drive N of Hafod Lane.

A C17 unit house of 2 phases. The first phase comprised a lobby-entry house with hall and inner room. To this a separate single-unit dwelling was added with a gable-end entrance. The building was a single dwelling by the late C19, when sash windows were introduced.

A 2-storey house set across the hillside on a levelled site, of battered rubble stone walls and a synthetic-slate roof replacing original stone tiles. It has C17 rendered stacks to the R of centre (the original hall stack) and the R end (the added unit), with a C19 stack to the L. A vertical joint to the R of centre separates the earlier house on the L and the later house on the R. The 3-window front has sash windows, in half dormers to the upper storey. In the lower storey the doorway R of centre has a stone segmental head, and a replaced stable door beneath a C19 stone-bracketed canopy. To its L the hall window has a wooden lintel and brick jambs. Further L and in the unit to R are windows with segmental stone heads. In the roughcast L gable end is an added lean-to rendered and painted cream, with a boarded door facing the front, 2-light casement in the side wall and a reduced stone stack towards the rear.

The rear of the house has outshut stair projections L of centre and to the L end, both with small stair lights. Both units also have small rear windows in the lower storey. The roughcast R gable end has a doorway on the L side, and a flat-roofed link to a late C19 stable, which has also been incorporated as part of the house.

Listed for architectural interest as a C17 unit house retaining original plan form and detail, one of the few well-preserved C17 farmhouses in the district.