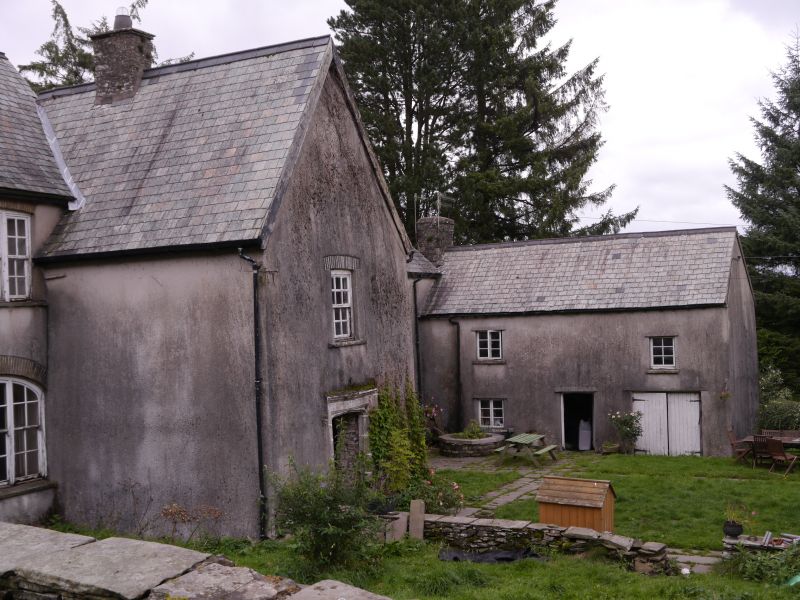 Location: Situated on the mountainside on the W slope of the Rhymney Valley, SW of Ystrad Mynach, and reached by a long lane from Llanbradach to S.

C16 and c 1600 with late C18/early C19 alterations, later C19 restoration. Original C16 house consisted of single range of central hall and screens passage entered from central S porch with parlour W and kitchen E. Before c 1600 the house was extended at NW to provide a staircase wing and probable brewhouse adjacent. In early C17 it was extended E to provide a new kitchen wing with a dairy added before 1692 when an inventory of the house was compiled, the former kitchen becoming a buttery. In late C18 a stable block was added at SE, a cross wing. c1800 the early central and W section was remodelled, with new ceilings on both floors, the roof raised and the frontage refenestrated. House belonged to Thomas family, an important Glamorgan family comparable in status with neighbours the Prichards of Llancaiach and the Lewis family of Y Fan, descendants of the medieval lordship of Senghenydd. Initials IT and date 1721 on fireback believed to refer to James Thomas. A later descendant Thomas Thomas married Jane Griffiths whose brother Dr Richard Griffiths was reponsible for the development of early tramroad and canal transport in the Rhondda valley, and thus initiated early industrial development in the area. The family later built Ystrad Fawr, a large C19 Italianate mansion in the valley.

Large farmhouse. Built of rubble, roughcast rendered, with slate roof, square corniced ridge, end and lateral stacks. 2-storey porch at centre is integral with lower range to right which also has a later lower cross wing, a former ancillary range, projecting front right; on the uphill (left) side, porch is attached to a later range with a higher ridge Rear elevation has 2 adjacent gabled cross wings, one to each range, that to uphill side lower and less deep and with a large stack in the angle.

Porch is steeply gabled and has a 6/6 pane sash to first floor and a moulded Tudor-arched doorway with sunk chamfers, incised spandrels and square hoodmould; inside there are narrow benches with wooden seats, flag floor, corbels supporting a ceiling; front door is 6-panelled with segmental arched overlight; attached to wall adjacent is a fireback of 1721. To left of porch, uphill, is a 2-window range of tripartite small-pane sashes, with stone-tiled voussoirs, cambered heads to first floor and segmental-arched to ground floor. To right of porch, downhill, is a 2-storey 3-window range of replaced small pane casements and central doorway with part-glazed door and hood. To rear the roof sweeps down low over downhill range; small pane casements to the cross wings. Attached walls enclose a rectangular garden to front.

Originally a 3-unit sub-medieval house plan consisting of central hall with screens passage entered from S porch with kitchen to right and parlour to left, later extended to right to provide a larger kitchen and to rear with a grander staircase and brewhouse. Main staircase is approached from hall and rear passage and has solid oak treads, rising in short straight flights with short landings through 2-storeys round a rectangular stone core. Uphill ground floor reception room leading off hall to left has panelled reveals and fragmentary panelling, moulded plaster frieze from its Georgian remodelling. Downhill rooms to right have doorways with chamfers and stops and comprise former buttery (right) with 2 chamfered beams, remains of former stairs beside deep fireplace - and kitchen which retains fireplace with heavy lintel, ovens, stone flue, remodelled stairs and boxed-in beams. Rear living room, former brewhouse, has beams with broach stops. First floor bedroom above parlour has plaster frieze contemporary with ground floor Georgian remodelling; wide panelled doors.