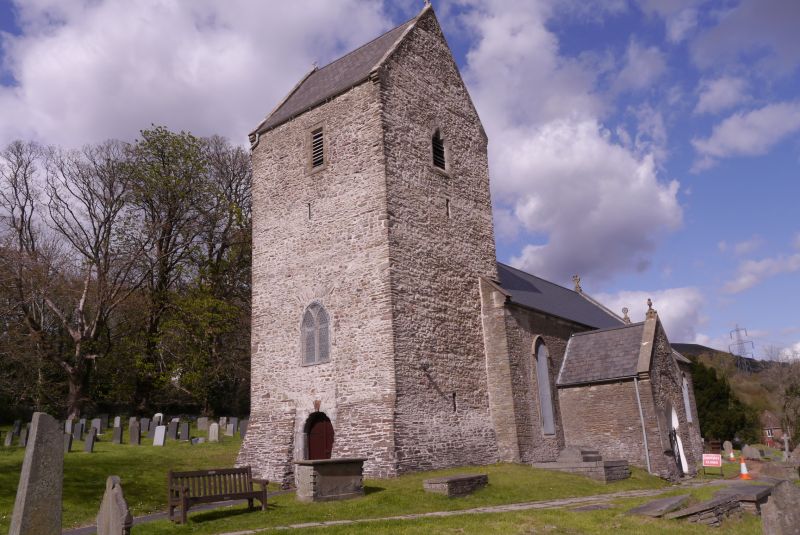 Location: Located in a high prominent position in the village at the N end of Church Street. Surrounded by a large graveyard.

The church is c1300, the style of the tower being typical of this period, though a church is first referred to in Bedwas in 1102. The surviving medieval openings are the W door, the blocked opening to the rood loft, and part of one of the N nave windows. Refenestration and some rebuilding occurred in the late C19. This is thought to have been the work of John Prichard in 1875. The nave S window, depicting the Good Shepherd is by W. G. Taylor, after 1883.

Nave, lower chancel, W tower, N chapel (now vestry) and S porch. Original fabric is rubble masonry, but areas rebuilt in the C19 are of roughly coursed stone. Slate roofs. The squat 4-stage tower is mainly c1300, and has a pronounced battered plinth and a saddleback roof. Narrow coursed stone to plinth and angles. Original W doorway under an almost flat head of narrow raked stones. Keystone to centre probably added. The doorway is round-arched with slight shoulders, in a surround of grey Sutton stone, containing a C20 planked door. Window opening above with similar relieving arch of narrow raked stones. The window has a slightly pointed arch and Y-tracery, but the stone blocks are very narrow suggesting possible replacement. Small stairlight to 3rd stage and C19 rectangular louvre opening above in heavy stone surround. The E side of the tower has a similar louvre opening. The S side has narrow rectangular lights to the 1st and 3rd stages, and a C19 louvre opening to the top with heavy dressing and a trefoiled head under a relieving arch. Openings to the N side are the same, without the 1st stage stair light.

The S wall of the nave is slightly battered. Porch to L of centre has been heightened; the original roof line is visible. Doorway with slightly pointed arch of narrow voussoirs. Raised coping on kneelers. To L side of doorway is a stone tablet with sill. The porch is flanked by single trefoiled lights containing trefoiled tracery. To the E is a 3-light window with intersecting tracery and trefoiled heads. Further E at a high level is a blocked rood light in heavy square surround with hoodmould. N wall of nave has similar windows to centre and E. Small rectangular light to W.

The S wall of the chancel has a single trefoiled light. Two-span E end, the N chapel slightly lower and narrower than the chancel. The N chapel and some of the chancel E wall have been rebuilt in coursed stone. Three-light E window with intersecting tracery and trefoiled heads under hoodmould with head bosses. Similar 2-light window to E end of chapel. To R is a C19 doorway with pointed arch and hoodmould, containing a planked door. To the L of the E window are 2 oval stone tablets. One is dedicated to the Rev. Edward Hyett (d. 1771). The 2nd tablet is surmounted by an urn and has foliate bosses. It is dedicated to James Price of Bedwas house and his family (there is a second memorial to them inside the church). Graves abut the E end, that to the L containing the raised tomb of James Price within iron railings. A slab on the ground reads 'to vault'. Truncated stack at W end of chapel.

The nave and chancel are divided by a simple pointed arch, possibly C19. Panelled wagon roof to nave. The chancel has an arched brace roof, the braces closely spaced, but above the altar is a ceilure. Two wide arches of former arcade in N wall of chancel with segmental heads and chamfered jambs. Both are infilled, that to the W containing the door to the vestry. Wood panelled reredos behind altar.

The high pointed tower arch has been concealed by a later wall, but the apex is still visible. The wall contains a pointed doorway with wood planked door. The tower has wooden steps with no risers leading to the upper stages. The S wall contains 2 large irregular recesses, one with a very small light, possibly for a former staircase. The porch has an arched brace roof and stone benches to the sides.

Round Norman font with cable moulding around base, on a later circular base and shallow square plinth. C20 benches in nave. Polygonal wooden pulpit to NE, C19 - 20, on a stone base. C19 marble wall memorials, mainly square or rectangular with entablatures, and sometimes with urns above. A large panel with colonnades and a decorated entablature is dedicated to James Price of Bedwas House (d. 1811) and other members of his family, and was erected by Maria Price of Cardiff. These were the ancestors of Dr. William Price. Opposite is a memorial to Charles Price. A panel on the S wall is dedicated to John Rees Morgan, aged 19, who is interred in a vault in the burial ground with other members of his family. Other memorials in the nave are dedicated to members of the Davies family of Ty Isaf, Ty Gwyn and Glyn Rhymney; a cartouche in the shape of a shield is to Watkin Watkin (d. 1854) former vicar of the parish, and is by E. Davies of Cardiff. In the chancel is a marble cartouche in memory of Edmund Lloyd, a surgeon (d. 1806). Above the tower arch is a wooden memorial to those who fell in the Great War. A gold plaque in the recess next to the N chapel entrance is dedicated to J. T. Richards who also died in the Great War.

Stained glass in E window, depicting Nativity, Crucifixion and Resurrection, after 1889 and dedicated to the rector of the parish. The S window of the chancel depicts a man in prayer (Faith). Two stained glass windows in S wall of nave of late C19 and early C20.

Listed as a church with substantial medieval fabric, the tower being of particular interest. Group value with remains of churchyard cross.