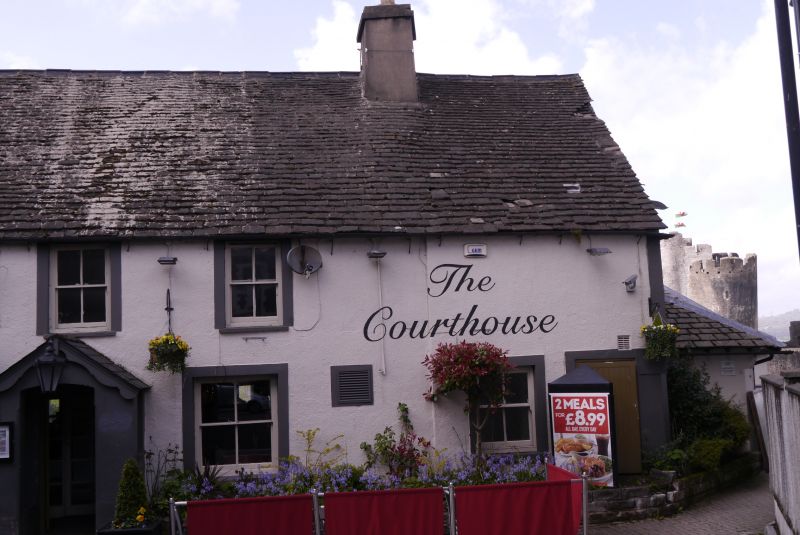 Medieval with later additions. Built as a court house in the C14 on a burgage plot next to the S gate of Caerphilly Castle. The court was previously held inside the gatehouse. Repairs were undertaken to the roof by the Lord of Glamorgan in 1429. Originally 2 unit and single storey with central passage and entrance to rear. Raised to 2 storeys, and wings added to each end: W wing is late C17, E wing C19. A home of the Price family who also lived at Plas Watford. Now a Public House.

Long 2-storey range. Roughcast with steep, stone-tiled roof. Two squat rendered ridge stacks, and end stack to L. Central gabled porch with bargeboards, probably C20, and planked door. Four windows to each storey, irregularly placed: 3 windows to L of entrance (the central one converted from a door) and 1 to R. Four-pane sash windows of various sizes, some horned, mainly with raised surrounds and under flat heads, those in the upper storey rising to the eaves. In the upper storey, 3 windows symmetrically placed above door and flanking windows and 1 window to far L. Small lean-to on L front. W gable end has 1 window. Two small lean-tos to E gable end with window above. Single-storey ranges with hipped roofs continue round to rear from E end. They include 2 late C20 glazed 2-storey pavilions.

The current entrance with symmetrical flanking windows is probably C19, and leads to a large room incorporating the units of the medieval court house. Large stack to L with back-to-back fireplaces, probably C17. The fireplace in the main room has a timber lintel and a small recess with stone lintel on its L side. Bar to rear, small fireplace to R with timber lintel, and toilet block beyond. The W room is C17 and has fireplace to E with timber lintel, possibly replaced. A doorway, now converted to a window, is opposite the stack and would have formed a lobby entrance. To the rear of the stack is a passage with the remnants of a fireplace staircase. Window in W gable end is infill of former fireplace. The 1st floor is cut-away in the W room revealing lap-jointed collar trusses with tie beams supported on short ties. The main range is said to have trusses consisting of low collars dovetail-lap jointed to the rafters and short braces.

Listed for its origins as a C14 court house, the layout of which is still discernible. Good C17 and C19 detail.