A Grade I Listed Building in Llancarfan, Vale of Glamorgan 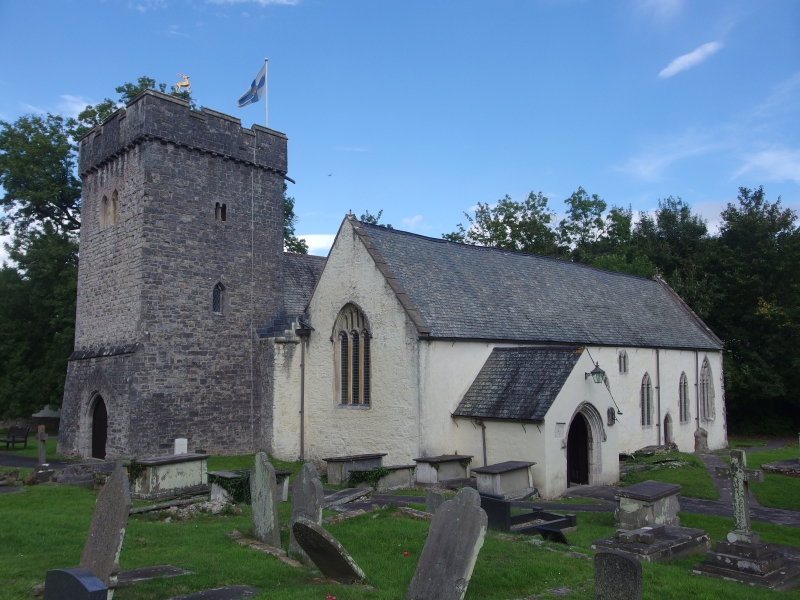 Location: Located at centre of village.

The parish church of Llancarfan is dedicated to St. Cadoc who founded a monastery on the site in the C6 and later was associated with the Abbey of St Peter, Gloucester. The church has C12 origins, but the nave and chancel were rebuilt 1284 to 1307. In the C14 the S aisle was lengthened, widened and raised to create the Raglan Chapel and the West tower was erected. the chancel, nave and Raglan Chapel were re-roofed in the C15. Between 1887-1888 the church was restored including substantial rebuilding of the West tower.

The church is constructed of coursed limestone rubble with evidence of earlier lime-coat. The roof plan is a double pile roof and the ridge of the chancel and nave is continuous as is that of the Raglan Chapel. The E window is a C19 3-light window with intersecting tracery to the head. The 3-light east window of the Raglan Chapel is C14 with cusped head and intersecting tracery to the head. There are four other C14 2-light cusp headed window with quatrefoils in the tracery to the head. There is a small timber priests door with 2-centred arch with plain chamfer between the first and second windows running E to W, and between the second and third is a small, high level pair of cusp-headed lancets lighting a rood loft behind. This is matched on the N face. At the W end of the Raglan Chapel is the S porch of early Perpendicular date, with ridged roof set beneath eaves of the chapel. Two tombstones (very poor condition) are set in the E elevation. The inner doorway is Early English and the round mouldings spring from the walls with the outer roll dying into the masonry. The inner doorway is complexly moulded with two C13 capitals lacking shafts. Over the inner doorway of the porch is a niche. The outer doorway has a hoodmould with square label stops with blank shields. The interior of the porch has an open ribbed roof with 7 pairs of principals with benches to either side. The W end of the Raglan Chapel has a Perpendicular style 3-light cinquefoil window with four smaller trefoil-headed lights to the head under a hollow chamfered hoodmould with square label stops. The tower is square, broad and low with embattled parapet resting on a small corbel table. The N elevation has a single window with ogee head at low level. The S elevation has a pair of round headed windows at high level with a single trefoil- headed lancet beneath. The W elevation has a pair of C19 ogee headed windows with the pointed W doorway with double plain chamfer under a relieving arch. The N elevation of the nave has two 2-light trefoil headed windows with an irregular shaped quatrefoil to the head. At the E end of the nave there is a corresponding pair of cinquefoil windows at high level indicating the earlier rood loft behind, beneath is a small single trefoil headed lancet. The N elevation of the chancel has a 2-light window similar to the others on the S side of the nave but smaller, and a large square-headed C15 five-light window beneath a depressed tracery arch in the head with quatrefoils in the spandrels, heavily cusped. Each light is cinquefoil-headed beneath a depressed arch and circular tracery lights enclosed within pointed arches. Central has four quatrefoils set in roundels above with diamond intersection. The mullions are continued straight through the head with quatrefoils occupying the rather odd shapes resulting from this tracery arrangement.

The chancel, nave and S aisle all have C15 cradle roofs. The Raglan Chapel has a similar cradle roof plastered beneath the ribs with decorative bosses. The wide chancel arch is Transitional Norman with simple chamfer supported on large impost blocks decorated with Romanesque dogtooth design. Remains of the C15 rood screen is now placed behind the altar beneath the E window. The arcade between the chancel and Raglan Chapel is of 3 bays, similar to those of the nave but of wider span with octagonal piers and flared capitals of Decorated date. The arcade between the nave and Raglan Chapel has four sharply pointed C14 arches springing from square pillars which are un-moulded. The five pillars have square capitals crudely decorated at each corner. The door and staircase to the rood loft remain in the N wall, the corbels which originally supported the screen either side of the chancel remain. The tower opens to the nave with a plain pointed arch upon corbels. The Raglan Chapel is separated from the S aisle by a C15 Perpendicular screen which is believed to have been part of the original rood screen. The font is Norman with crude foliate decoration. There is a C12 stoop with roll moulding adjacent to the S door. There is a fresco on the S wall showing the text of the Apostles creed. Other frescoes have been documented on the S aisles revealed during C19 restoration. Since covered.

Listed grade I as an exceptionally fine example of a parish church with many surviving medieval features.