A Grade II* Listed Building in Wenvoe, Vale of Glamorgan 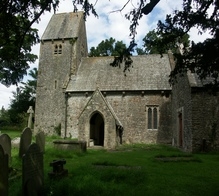 Location: In the centre of St Lythans hamlet, set back from the road, reached by a short track and surrounded by a roughly circular walled churchyard incorporating stone stiles.

Interior is rendered with exposed dressings. Arch-braced roof in 4 bays with lower ridge piece, single row of purlins, boarded ceiling, possibly some timbers are original, restored C19; chancel has canted boarded ceiling with a grid of moulded ribs with heraldic bosses at intersections. Notable deep Norman font engraved with chevron pattern with unusual font cover carved with vine and grapes and cruciform metal fitting with ring. Nave has oil lamps converted to electricity. Pulpit, altar and altar rails by Prichard and Seddon. Parquet floor to pewless nave, flags to chancel, no stalls. Small blocked rectangular window at SE nave to light former rood. Completely plain pointed chancel arch. Three steps up to sanctuary, niche to left of altar and corbel to right. Some small wall monuments throughout. The most striking feature of the interior is the arrangement of bulbous piers, one detached and one attached at each side, with flattened segmental arches, created when the chancel S wall was breached by the addition of the Button chapel. This has an internal similar to external Tudor arch to W doorway, flag floor, no furnishings.

Listed II* as a basically medieval church with a large Norman font and an interesting large C16 chapel.