A Grade II Listed Building in Wenvoe, Vale of Glamorgan 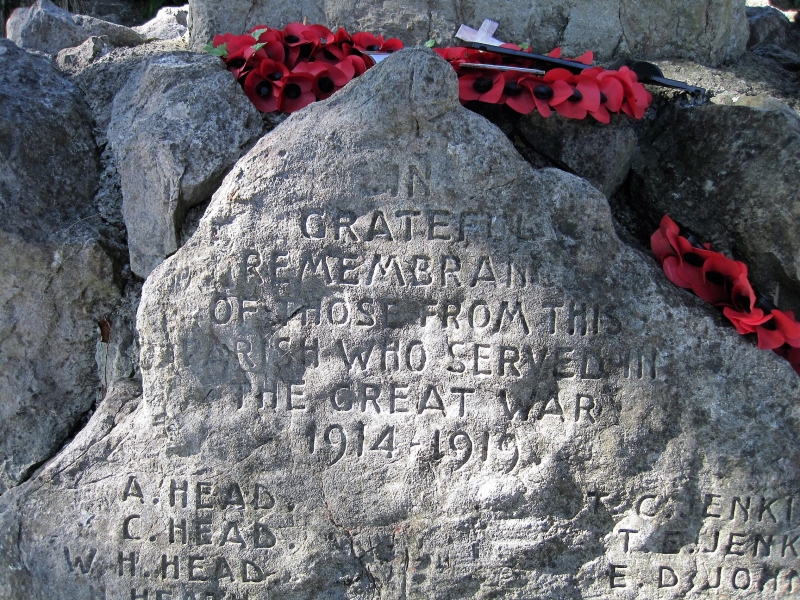 Location: In a small memorial park at the centre of Wenvoe village on the W side of Old Port Road, c80m to the north of the St Mary’s church and just to the south of the Wenvoe Arms.

Erected to commemorate those from Wenvoe who served in World War I. Designed by William Clarke of W Clarke of Llandaff who was living at Upper House in Wenvoe. Work started on 23rd May 1919 with the Carboniferous Limestones used extracted from the Alps Quarry in Wenvoe. Construction was complete by mid November 1919 at a cost of £289:11:4. The names of those killed in World War II were later added.

War Memorial. Tall monolithic stone surrounded by 9 irregular smaller kerbstones forming a rustic plinth. Set within a circular paved area with interspersed kerb stones accessed by steps with flank walls from the road. The main monolith and plinth kerbstones have been left in a rough state but with dressed panels for inscriptions. The monolith has a dressed panel on its main E face inscribed ‘TO THE HONOURED MEMORY OF THE MEN FROM THIS PARISH WHO DIED FOR THEIR COUNTRY IN THE GREAT WAR 1914-1919’ with below the names of the dead and below these has been added ‘ALSO TO THE MEMORY OF THOSE WHO FELL IN THE WORLD WAR 1939-1945’ with names below. 6 of the plinth kerbstones have been inscribed with the names of those who served in the World War I.

Included for its special architectural interest as a well preserved and unusual war memorial displaying fine craftsmanship and a particularly interesting use of local materials. Important for its historical value as a visible reminder of the sacrifice of a community during the major wars of the C20, unusual also for recording the names of all those who served in WWI, not just those who were killed.