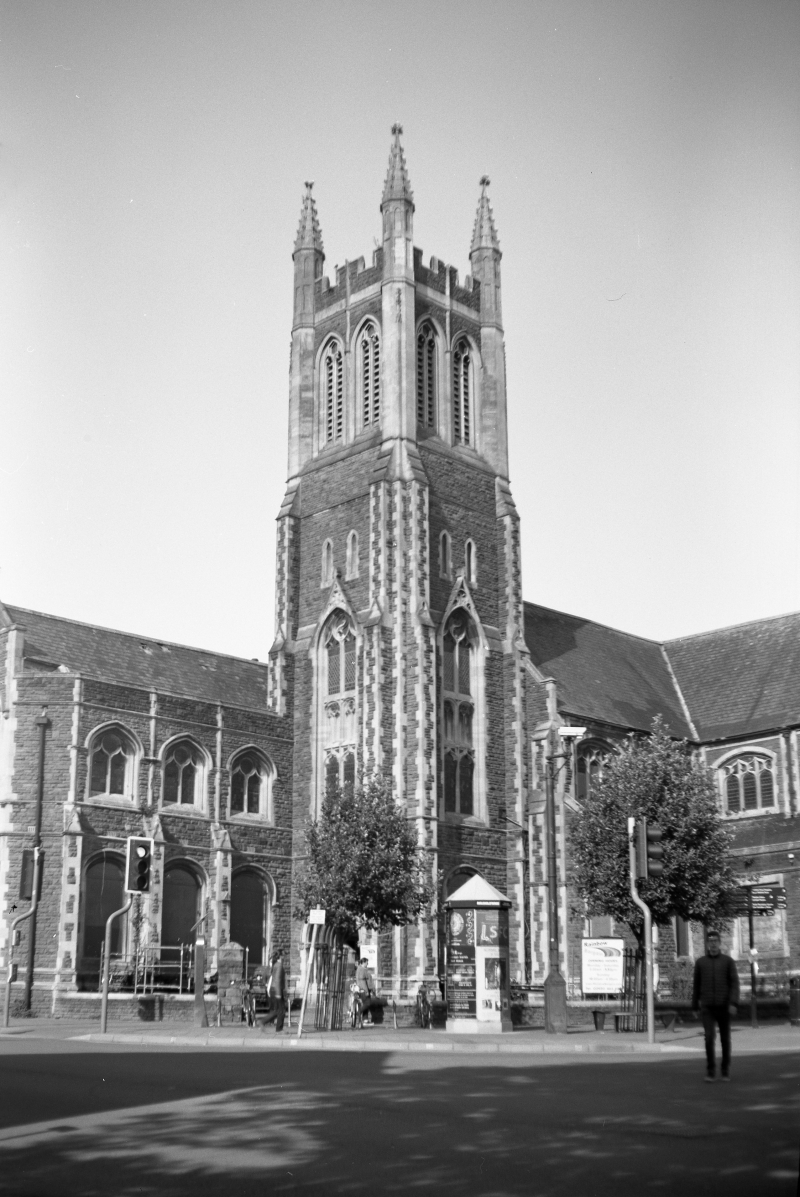 Location: At the junction of Albany Road and Wellfield Road.

Built 1897-8 by Jones, Richards & Budgen, architects of Cardiff. Now closed as a chapel and re-used as a superstore.

An ambitious Gothic chapel mixing Decorated and Perpendicular styles, of snecked rock-faced Pennant sandstone with lighter Bath stone dressings, and slate roof behind coped gables. The plan is unusual and superficially resembles an Anglican church, comprising a N-S nave across the corner of Albany Road and Wellfield Road, with a transept on the E side, and a shallower transept on the W side not visible from the street, where the pulpit and communion table were situated. A porch tower is at the S end of the nave and has an integral attached hall immediately to its W facing Albany Road.

The 4-stage tower has set-back buttresses in the lower 3 stages. A doorway with 3 orders of shafts with foliage capitals to a 2-centre arch is in the S elevation, and has double boarded doors with strap hinges. In the E elevation is a single window in the lower stage. The tall second stage has, in both S and E elevations, double transomed 2-light windows with Decorated tracery, and gabled canopies enclosing blind quatrefoils. The shorter third stage has pairs of small lancets in each face. The upper stage is narrower, of ashlar, and has polygonal clasping buttresses with thin attached pinnacles to the outer facets rising from the angles of the third stage. Each face has a pair of 2-light belfry windows with diagonal shaft between probably intended to be carried up as a pinnacle. Above the belfry windows the walls are of rock-faced stone. Above a string course and ashlar band is an embattled parapet. The corner pinnacles are as broad as the buttresses and have 2 tiers of shallow panels, with large crocketed finials.

The nave and transept both have lean-to aisles with square-headed windows, and plain parapets with moulded freestone coping. The aisle windows are all boarded up. In the angles of the aisles on both sides of the transept are porches facing Wellfield Road. The doorways each have a 2-centred arch and hood mould with head stops. Double boarded doors have strap hinges. The nave has 2 bays on either side of the transept, with 3-light Perpendicular clerestorey windows and square headed aisle windows. The transept is 3-bay with similar clerestorey and aisle windows. The E wall, facing Wellfield Road, has set-back buttresses crowned with tall pinnacles (finial missing on the N side). The 6-light E window has Decorated tracery. The N nave window, now partly obscured by a later detached hall immediately N, is 6-light with Decorated tracery, flanked by 2 square-headed windows and with doorways boarded up at the R and L ends.

The integral 3-bay, 2-storey hall is to the W of the tower and has a string course between storeys continuous with the tower. In the lower storey facing Wellfield Road are buttresses capped by gablets with pointed quatrefoils. Attached shafts stand on the buttresses and were probably intended to be continued as pinnacles. The parapet is plain. The arched lower-storey windows are boarded up but the upper storey windows are 2-light with Decorated tracery and linked hoods. The faceted S elevation is gabled to the centre while the facets continue the parapet of the E wall. A single arched window is in the lower storey and 3-light Decorated upper-storey window has a hood mould with foliage stops and ashlar surround. Below the sill are 3 blank panels.

The rear elevation, facing the rear of Angus Street, is brick. The nave has clerestorey windows similar to the front, and the W transept has a 5-light window with early Decorated tracery.

The nave and transept have Perpendicular style arcades with diagonally-set piers with attached filleted shafts. A lowered ceiling has been inserted but the building is said to retain its original 4-centred boarded ceiling. A dais to the W transept accommodated the altar table. To its L is the Perpendicular style stone pulpit, which has a moulded base and blind Gothic panelling below a foliage cornice.

Listed for architectural interest as an ambitious Gothic design with a fine tower providing one of the most prominent landmarks in the district.