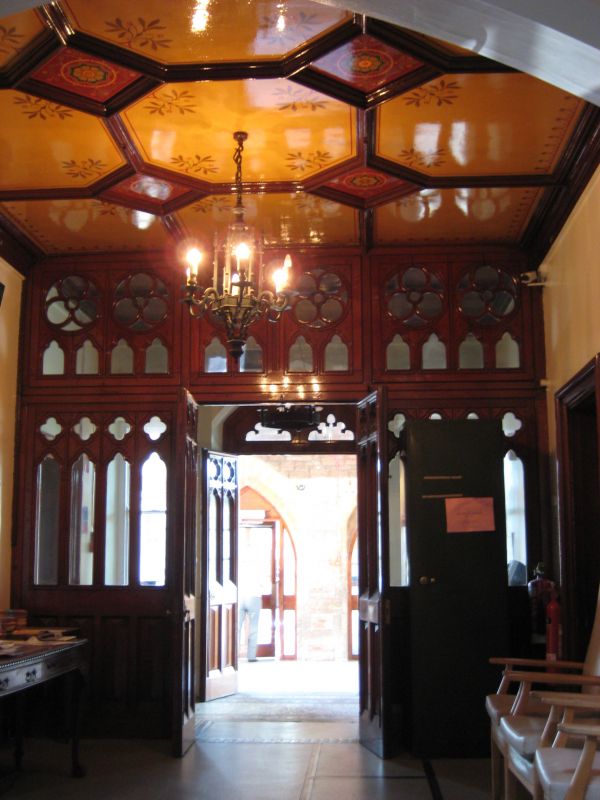 Location: On the north side of Fairwater Road and set back behind a tall wall.

Originally known as Rookwood. The nucleus of 1866, which is to the north and east, was built for Colonel Stock Hill. The porte-cochere and the south-west wing was added in 1881 by J Prichard, as was the Camellia House. This was all to reflect Colonel Hill's increased status and wealth. He was High Sherriff of Glamorgan in 1885 and one of the MPs for Bristol from 1886. He died in 1902 but his wife continued to live in the house until 1917. It then became a convalescent home for injured WWI servicemen, a role it repeated in WWII; and it remains a hospital for paraplegics.

The walls are faced with Radyr stone rubble with Bath limestone ashlar dressings; plain tile roofs. Two main storeys throughout, but the later build is taller and has hidden attics.
South front of building has a large 2-storey gabled porte-cochère added by Prichard in 1881; ground floor with stone arches supporting first floor external wall. Bowed 3-light mullion-and-transom oriel window on first floor with three carved stone panels beneath (of a ship at sea, of an 18 pounder being fired by a gun team and of the House of Commons, all three representing the work of Colonel Sir Edward Stock Hill, contemporary owner of Rookwood). The arches have been filled in to make entrance screens and a single storey wing is attached to the front, this partly obscures the carving of the arch supporters and stiff-leaf capitals. Octagonal turrets to either corner with louvred tops and pointed caps. Mullion-and-transom window to either return. Steeply pitched gable with coping, quatrefoils to parapets and gable. To west of porte-cochere, a bay with external chimney incorporating a coat-of-arms and with two octagonal ashlar stacks above; chimney flanked to either side by a 2-light mullion-and-transom window with trefoil headed lights; parapet with quatrefoil panelling; on ground floor, a splayed 4-light bay window in ashlar. At west end, a splayed two storey 5-sided bay window with three transomed windows on the ground floor and on the first floor three shorter transomed windows with trefoiled heads. Band of panelling with leaf pattern below eaves. Hipped semi-octagonal roof rising to a peak. West gable end with small circular turret at north corner with two storey splayed bay with peaked roof to north of it, smaller turret to the rear corner, this one with a dovehouse in the top. The ground floor of this wing is obscured by a modern hut which replaces the original conservatory. It is uncertain how much of this wing was added in 1881 and how much given a new decorative treatment by Prichard. It is noticeable that the ground floor bay remains undecorated.
To north again, a long two storey wing from 1866. Plain sash windows with plate glass; some bay windows. This continues to the north-east as a very plain service range and leading finally to the Camellia House (now Medical Officers' Quarters) built against the east elevation by Prichard in 1881. This is single storey, L-shaped with a slate gabled roof; this replaces the original glazing on the south slope. Teak graining (brick walls to rear). In apices of the south and east gable ends there is Gothic tracery with a band of floral mosaic panels below.
Finally the south-east wing of 1866, which has windows with Caernarvon heads and plate glass sashes. This section has been reroofed and the main external stack truncated.

Only the staircase hall was seen at resurvey, which is within the later southern part of the house. The staircase of polished wood of Gothic design with panelled painted soffit; similar painted panelling (by J C Crace FSA) to ceiling of staircase chamber and also to ceilings of Chapel and to Committee Room, these were not seen.

Included as a Victorian house of 1866 with a significant extension of 1881 designed by John Prichard and some important contemporary internal features.