A Grade I Listed Building in Llandaff, Cardiff 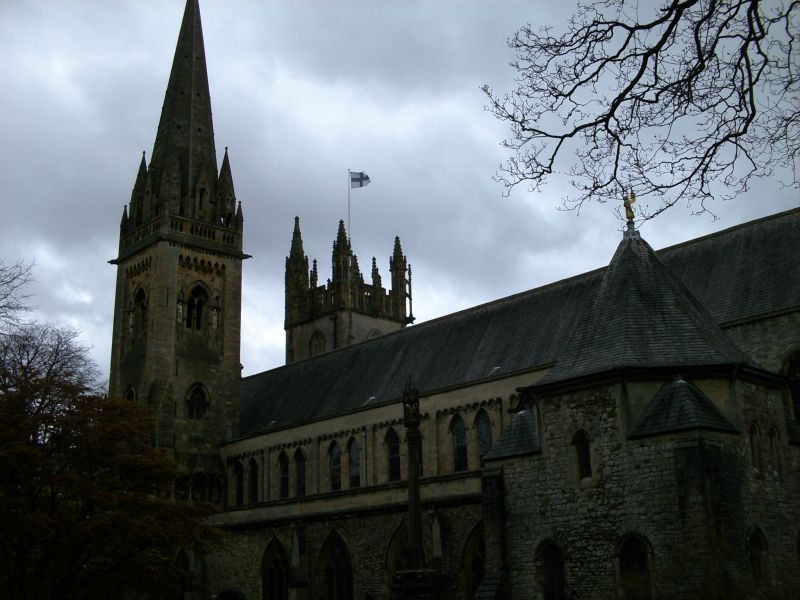 Location: Sited below and to the north of the plateau which carries the village but forming a striking object from every direction as the most prominent building in north-west Cardiff.

The site first held a pre-Norman monastic church but Urban, the second Norman bishop, decided to rebuild on a greater scale in 1120. The sanctuary arch, two doorways and some fragments survive from the first build, complete in c1170, but this church was mostly replaced by Bishop Henry of Abergavenny in the C13 and the choir, nave and W front survive from this period, though much rebuilt (see below). The nave is of two periods and two designs, with the four W bays rather later in the C13 than the rest. The Lady Chapel is also late C13, while the nave aisles were remodelled in the C14. The W front was given two towers in the later Middle Ages of which the NW or Jasper Tower survives; this dates from the late C15. In the century and a half following the Reformation the building became very decayed and finally, following damage to the roof and NW tower in the Great Storm of 1703, the SW tower collapsed through the nave roof in 1722 (but see References). In 1734 John Wood the elder of Bath was commissioned to fashion a new church out of the choir and the east end of the nave and took the opportunity to put into practice his theories about the form of the Temple of Solomon in Jerusalem. The resulting ''pagan temple'' cost some £7000, and although left unfinished in 1752 (''the whole has the look of a mean market-house or town hall'', Winkle, 1842), was in use for a century amid the ruins of the medieval Cathedral; an idea as bizarre today as it was to the Victorian restorers. In 1841 the Diocesan Architect T H Wyatt began the restoration of the fabric but only fragments of his work remain and the Cathedral today is due almost entirely to John Prichard, the son of the senior Vicar Choral (there were only two), who began with the Lady Chapel east window in 1843. In 1845 he was in sole charge and in 1852 he was commissioned to complete the nave and W front to bring the Cathedral back to a wholly medieval appearance. Unpicking the medieval fabric from the completely demolished ''temple'' showed that Wood had behaved more sensitively than had been imagined and much more ancient fabric was found to have survived than had been expected. Nothing now remains of Wood's building other than the urn in the Processional Way (qv Prebendal House). Prichard took J P Seddon as partner to do this work and it was he who designed many of the fittings and furnishings. The work of restoration and rebuilding was finished in c1870 but in January 1941 a land-mine, exploding immediately outside the south front, brought the Cathedral once again to ruination with the roofs and many of the fittings destroyed. Restoration was begun by Sir Charles Nicholson, who had been Cathedral Architect for many years, but he died in 1949 and the work, including almost all the new fittings, was completed by George Pace between then and 1960. He instigated some important changes like the lowering of the choir arch, changing the shape of the Chapter House roof, and placing a division between nave and choir. The spire, the top of which was dismantled in 1941, was restored in 1956. Since c1960 the Cathedral has remained unaltered.

The W door leads immediately to a flight of six steps down to the floor of the nave; previous to restoration the floor seems to have been four steps below the door (see Winkle). The roofed space is continuous for ten bays although it is divided into nave and choir by the concrete parabolic arches carrying a cylinder containing organ pipes and fronted by Sir Jacob Epstein's ''Christ in Majesty'' of 1957. There are four bays of larger piers and then smaller ones which are evidently slightly earlier but all are of Early English type. The division between them marks the position of the W front of John Wood's ''temple'', see History. Most of the work at this level is medieval but the clerestorey is almost wholly Prichard while the compartmented timber ceiling is by George Pace, completed in 1955; the divisions are 24 x 5 with an extra half on either side. Most of the Prichard and Seddon fittings, which were very fine, were destroyed by the bomb, some fragments of the choir stalls were re-incorporated but the rest are almost all by Pace, including the pulpit of 1957. The Pre-Raphaelite glass and other decorations were not in the Cathedral at the time of the bomb and escaped. The E window over the sanctuary arch has glass designed by John Piper and made by Patrick Reyntiens in 1959. The font dates from 1952 and was designed by Allan Durst. The S aisle was largely reconstructed post-WWII and has a Pace designed plaster ceiling. The choir has Pace designed stalls reusing parts of the Prichard and Seddon ones, but their Bishop's Throne survives. Many good monuments, both medieval, like that to Bishop Marshall (died 1496) and those to important late C19 bishops, Alfred Ollivant (died1882) by H H Armstead, and Richard Lewis (died 1909) by Goscombe John. There is also the memorial in the Lady Chapel to George Pace, Cathedral Architect 1949-75. There is much glass in the choir aisles by Burne-Jones and Morris and Co. as all was removed for safety in the war. The earliest is the 1866 E window in the S aisle which was given by John Prichard and his sisters in memory of their parents who are buried immediately outside, as is Prichard himself (qv churchyard memorials). This was the first window in the Cathedral to be ordered from Morris and Co. The S choir aisle contains the Celtic cross discovered by Bishop Ollivant in the Palace dairy well in 1870. The Lady Chapel has a Perpendicular reredos restored in 1933; and painted stencil patterns over the walls and vaults done by Geoffrey Webb in 1909. The Chapter House has four quadripartite vaults carried on a central shaft with a water-holding base. The upper room was entirely reconstructed by Pace. The village school was held there during the C18 and early C19. The Norman N door of the Cathedral has three recessed orders of zig-zag moulding on the outer face, now within the Processional Way which goes through pointed side arches by St. David's Chapel to the Prebendal House (qv). The chapel, completed in 1956, was entirely fitted and furnished by Pace and is the Welch Regiment Memorial Chapel.

Included and highly graded as one of the four medieval Cathedrals of Wales and also for its particularly dramatic building history and the fine quality of its features.