Memorial to Richard Prichard in the Cathedral 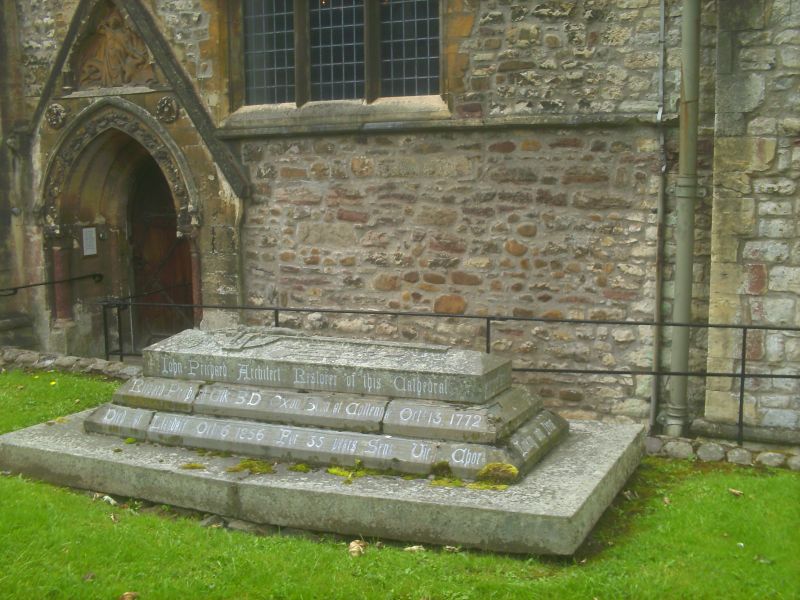 Entry Name: Memorial to Richard Prichard in the Cathedral

Location: In the Cathedral Churchyard outside the south wall of the Lady Chapel.

Tomb of Richard Prichard and designed by John Prichard who is also buried here. Prichard was Senior Vicar Choral at the Cathedral, while his son, John Prichard, was Cathedral Architect, responsible for rebuilding Llandaff Cathedral from its state of near ruin. He was perhaps the premier Welsh Gothic Revival architect and was responsible for many notable buildings in Llandaff, Cardiff and throughout South Wales.

Grey stone base with three diminishing tiers. The chamfered faces of the two lower tiers and the sides of the chest at the top all have inlet lead lettering. The top surface of the chest carries a cross and the relief symbols of freemasonry. The lettered inscriptions say : ''Tomb of Richard Prichard 1772-1856 for 35 years Senior Vicar Choral and his son among others John Prichard 1817-1886 Restorer of this Cathedral''.

Included for its historic interest as the tomb designed by John Prichard, architect for the Victorian rebuilding of Llandaff Cathedral, for his father and other family members and which is also his own memorial.