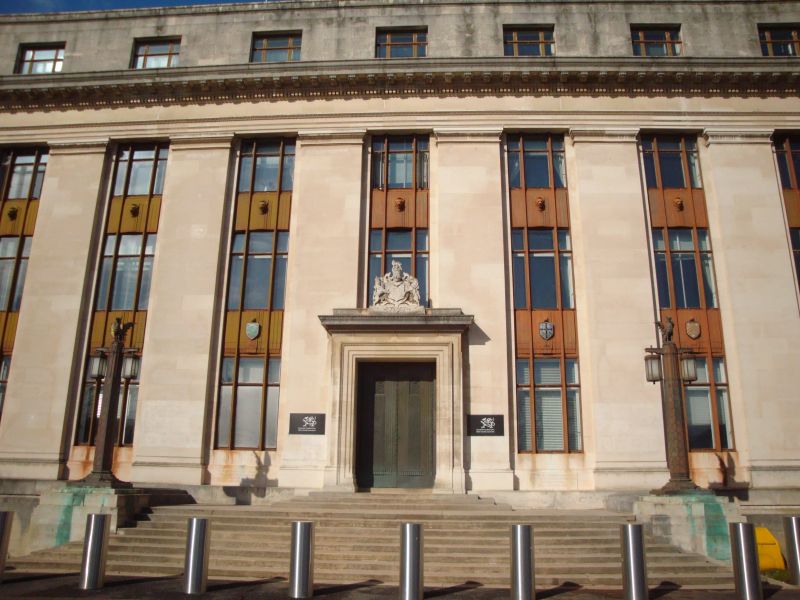 Location: At N end of Cathays Park, facing S onto N side of Alexandra Gardens.

The foundations of a Classical Welsh Government Offices building had been laid on the site in 1914. In 1934-38 the present front block was built as offices for the Welsh Board of Health, designed by P K Hanton, architect. Between 1972 and 1979, the massive rear block was added, by Alex Gordon and Partners. The Architects' Journal called this block 'a symbol of closed inaccessible government', giving the impression of 'bureaucracy under siege'.

Front block faced in Portland Stone. Three storeys plus attic on basement. South-east elevation of 15 bays. Each bay with tall rectangular glazed opening extending vertically downwards through 3 main floors and flanked by plain pilasters of equal width to windows; entablature with modillion cornice; doorway in centre bay. Recessed attic storey with 13 square glazed openings and with carved panel to each end bay; hipped roof behind. Against each return, a projecting portico rising to same height as main entablature of south-east elevation; giant pilasters, space between each pilaster enclosed by a glazed opening of similar proportion to those on south-east elevation; central doorway; entablature.

Listed for special interest of 1930s block. Group value with other listed buildings in Cathays Park.