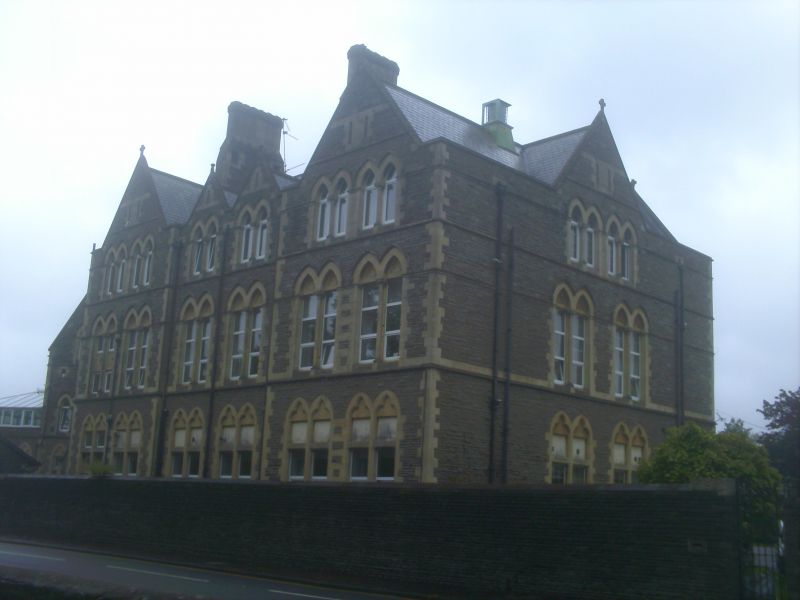 Location: In its own grounds to the N of Queen Anne Square with gardens to the S and yard and car park to the N.

Built in 1875 by John Prichard, architect of Llandaff, for the 3rd Marquess of Bute as an orphanage and nursing home. It originally comprised a main range with gabled end bays and S and E towers. This was extended for an Industrial School in 1887 by adding further bays on the W side, including an additional tower, to make a near symmetrical front. This and subsequent additional phases were undertaken by E.W.M. Corbett, architect to the Bute Estate. Materials were chosen and details were carefully designed to match the original building, ensuring convincing stylistic consistency. The church at the E end was added in 1897-8. A W wing was built in 1908 and additional projections and service wings were added at the rear by 1920.

A substantial early Gothic style nursing home of coursed rock-faced sandstone and Bath stone dressings, slate roof behind coped gables, and ashlar stacks with tall round shafts in rows or clusters. It is comprised of a near symmetrical 2-storey and attic main range facing an entrance forecourt on the S side. It has advanced gabled bays to the centre and ends. The central bay has a tower attached on its R (E) side, contributing the asymmetrical accent to the design. Further 4-stage towers are set back at each end of the elevation. Prichard's building extended only from the central to the E gabled bay, and the tower set back at the E end. Corbett extended it on the W side to its present near symmetrical form in 1887. Set back at the W end of the main range is a W wing built at a splayed angle in 1908, with its doorway facing the entrance forecourt, but its rear facing North Road. On the E side of the main range is the church of 1897-8 raised above a basement providing domestic accommodation and facing Colum Road to the E. The church is built on a near N-S axis.
The windows are replaced in original openings. In the lower storey are 2-light mullioned and transomed windows with blind cusped-headed lights. In the upper storey and attic the 2-light windows have arched heads and colonettes with waterleaf capitals. The gabled bays are 2-window with single 3-light attic windows and 2 vents in the gable. The elevations between are 3-window with single-light windows to the outer sides, and 2 gabled 2-light attic windows with corbel table below the sill. The 3-stage tower on the R side of the central gable incorporates a porch in the lower stage and has a diagonal buttress on the R side. It has a 2-centred arch with boarded door and strap hinges. A hood mould has head stops and head at the apex with crocket finial. Blank shields are in the spandrels. Above it the 2nd stage has a 2-light mullioned and transomed oriel window with trefoil-headed lights and stone slab roof. The 3rd stage has 2 cusped lights and hood mould continuous with an impost band. Below the sills are cusped niches, between which is a blind cinquefoil-headed arch beneath a gabled canopy. A sill band to the niches is continuous with the attic sill band to the L. The embattled parapet projects on corbels, behind which is a saddleback roof.

The central gable has single windows in the L side wall and 2-light attic dormer. The gabled bay at the R end has single arched windows in its side wall with 2-light attic window under a dormer roof. In its R side wall is a single window in each storey and set well back is a 4-stage tower. This has single paired lights in the lower 3 stages, under a lean-to stone slab roof with sinuous moulding to the cornice. The upper stage has a 2-light window similar to but smaller than the attic windows of the entrance front, and a hipped roof on a corbel table with stack on the L side.

Further L is a single-window link to a 2-storey with attic and 3-storey W wing built at a splayed angle. The asymmetrical front has window details similar to the main range, except that in the lower storey the windows are boarded up above the transoms and the middle-storey windows have blind arched heads with trefoils. It has 2-light windows and 3-light attic window to the R-hand. To the centre is a bay set forward with moulded lintel, blank panel and relieving arch to a doorway with replaced double doors. Above it is single upper-storey and smaller plain attic window and parapet. Further L is a 3-storey bay set forward with two 2-light window, which are smaller and beneath a gable in the upper storey. The S side wall facing the garden has windows grouped to the centre comprising two 2-light windows, the smaller upper-storey windows beneath a gable. The rear, facing North Road, is symmetrical, and composed of 3 double bays, the outer having gablets over the upper storey, the inner slightly with gablets over both upper-storey windows.

At the E end of the main range is a short single-window link from the E tower to the church. The Early English style church is raised above a domestic basement storey and comprises a nave with lower and narrower chancel and a side chapel on the W side of the chancel (or S in liturgical terms). It has angle gabled buttresses and slate roof. The side chapel has a single window and tall stack in its side wall and a 3-light liturgical E window, below which is a 3-light mullioned and transomed basement window. The chancel projects in front of the side chapel and its liturgical E window is 3 stepped lancets with linked hoods and blind panelled aprons, below which is a 3-light flanked by 2-light mullioned and transomed basement windows. Facing Colum Road the chancel has a gabled projection with ashlar stack. It has 3 stepped transomed lights with blind cusped heads, beneath an arched hood mould framing a blind tympanum. The domestic basement storey has a 3-light mullioned and transomed window and both storeys have small windows to the R in dressed surrounds. Set back on the R side of the projection is a short tower and spire occupying the end bay of the nave. The tower is built above a single-window basement projection, and is 2 stages, octagonal in plan. The lower stage has narrow lights in each facet. The upper stage has detached shafts to the angles, with segmental pointed belfry windows, ashlar battlements and slate parapet spire.

The remaining 7 buttressed bays of the nave have lancets with hood moulds continuous with an impost band, and sill band, with 2 tall eaves stacks. An ashlar cornice incorporates a corbel table. The basement has segmental arched windows and a doorway in the bay set back from the R end with boarded door and strap hinges. The liturgical W end has two 2-light windows with blind aprons. A central buttress is of ashlar masonry between the windows, while in the spandrels the buttress turns to a broad shaft supporting an empty canopied niche on a corbel enriched with foliage, on which is a trefoil with shafts and outer attached pinnacles. The angle buttresses have broad octagonal pinnacles with pyramidal caps. The basement has a segmental-headed doorway and 2 windows on the R side, and a single window on the L side. The opposite side wall of the nave, facing the yard at the rear of the main block, is 7 bays with lancets and a tall stack to the centre. The basement has arched windows with cusped-headed lights, except the 2 bays at the L end which are replaced beneath original segmental arches.

The rear faces a service yard on the N side and has plainer detail. Beginning at the E end, behind the tower at the E end of the main range is another parallel 2-storey rear wing with 2-light windows flanked by single windows, set back on the E side of which is the link to the church, which has two 2-light mullioned and transomed windows. Further W is a lower gabled link at the back of the main range to detached rear wing with gablets and hipped-roof projection, then a single-storey wing under a hipped roof with plain dressed surrounds to the openings. A double-gabled 3-bay rear wing has a single-storey 4-window N projection, to the W of which, behind the tower at the W end of the entrance range, is a 2½ storey projection. A single-bay projection is to the rear of the W wing, to the L of which is an entrance with replaced door under a tablet engraved 'Nazareth House'.

The nave has a gallery at the W end, and relief panels of the Stations of the Cross in crocketed arched frames. The chancel has a marble reredos with blind cusped panels and figures of Archangels Gabriel and Michael. The E window has glass showing the 7 Sorrows of Our Lady, while the side chapel window has stained glass showing the Sacred Heart, Augustine and Joseph.

The corridor leading to the church has 2 cusped stoups and a plain open-well stair with iron balusters.

Listed for its strong Victorian Gothic character, and for its social-historical interest as an important Roman Catholic institution erected under the patronage of the 3rd Marquess of Bute.