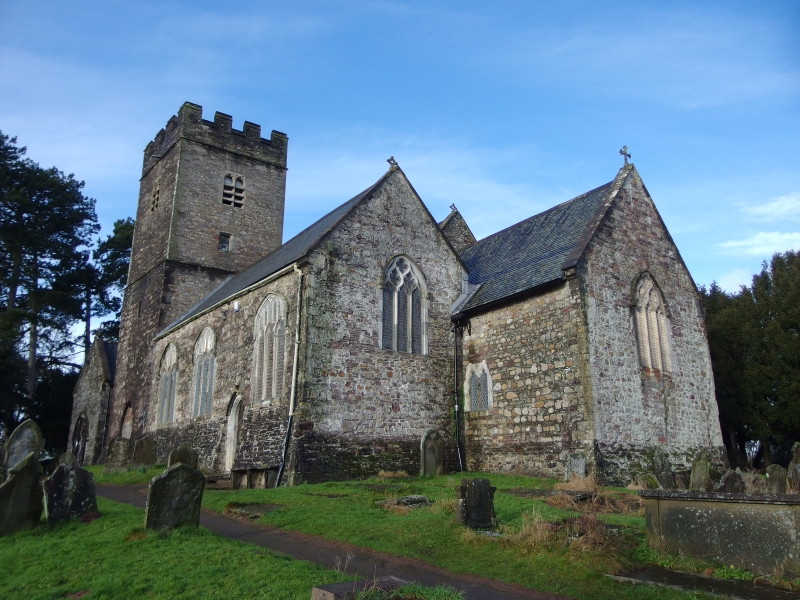 Location: In a commanding hilltop position with access lane and open ground to N and churchyard extending below on S slope.

Core of building is C14, date of E and W windows; S porch is later, an earlier entrance being through the S tower, and overlaps the C15 SW nave window though from its roof the porch appears still medieval; tower is earlier than the C15 S chapel which is adapted to it; nave refenestrated C15; N chapel C16-C17. Church, including nave roof, partly restored c 1858 by GG Scott, paid for by EA Freeman, the antiquary who lived at Llanrumney Hall; further work c 1869 by Charles Buckeridge; chancel restored by Ewan Christian; some doors reputedly made of wood from warships broken up at Dover after First World War. Pews were recorded as painted white in 1902. Dedication saint was an early Christian Bishop of Rouen; appears on 1880 OS map as St Melan, but many other variations recorded. Welsh name for the village is Llaneirwg, appears as Llaneurog on OS map of 1901, various other spellings also recorded . Map of 1880 shows a building apparently within the churchyard enclosure at SW.

Interior is unrendered rubble with ashlar dressings. Wagon roofs. Nave has 2- bay S arcade of 2-ordered pointed arches with stepped capitals, one bay occupied by organ, and a further blocked bay to tower. Blocked N door. Some early bench seating with simplified cusped poppy-heads. Font is small, hexagonal and roughly chalice-shaped with blind tracery panels to stem. Panelled vestry created adjacent. Pointed roodloft entrance doorway NE with square-headed former access doorway above. Unusual wide pointed chancel arch with the mouldings sweeping out to the stepped capital and narrower arch sharing the same pier to N chapel, C19 stone pulpit in front; window in nave apex; wooden chancel screen in late medieval style probably early C20. Chancel has squint from N chapel which contains early C19 monument to David Richards of Llanrumney Hall and an asymmetric arch to S chapel which has an altar at E; above in E wall is a niche with finely wrought foliage corbel, no canopy; sill appears to incorporate piscina. C18 and C19 wall tablets in chancel, one to members of the David family of St Julian's farm. E window of 1882 believed to be by Clayton and Bell. Enriched wallplate, shaped ends to the ribs of the wagon roof. Six bells in tower originally from Chepstow foundry 1713 recast 1913.