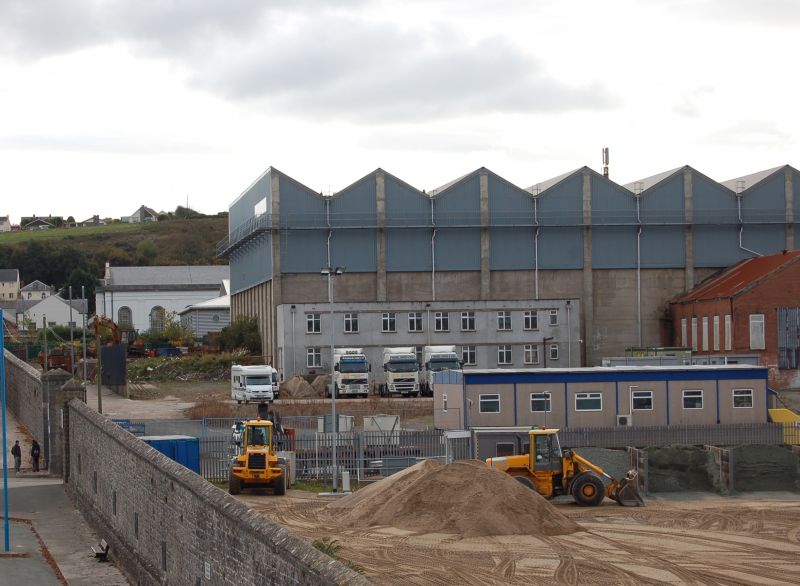 Location: Situated some 100m SW of eastern entry to dockyard and 100m N of former chapel.

Rivetted steel girder frame 162ft 7ins (49.53m) by 121ft 4ins (36.96m) with saw-tooth ridged roof of half bays each end and 5 between. Concrete-encased steel piers to angles and up to each gable apex, 59ft 9ins (18.21m) high, steel uprights between. Concrete infill between to 30ft (9.14m) and corrugated iron cladding to upper half. Iron gantry around below gables. Full-height opening on W front, giving clear opening of 160ft by 40ft (48.76m by 12.19m) closed by 6 large rolling steel doors with spaced steel plating to allow infill of gravel to 20ft (6.09m) to absorb bomb fragments. Rendered brick 2-storey flat-roofed range along N side.

One of only two surviving sea-plane hangars of this type in England and Wales. Base opened 1930 and two squadrons were based here initially, more in wartime when it played a major role in convoy protection. The base closed in 1959, the last flying boats being withdrawn February 1957.

Old photographs suggest that this was originally built as two bays with half bays each end, and enlarged to match No. 1 hangar before 1938.