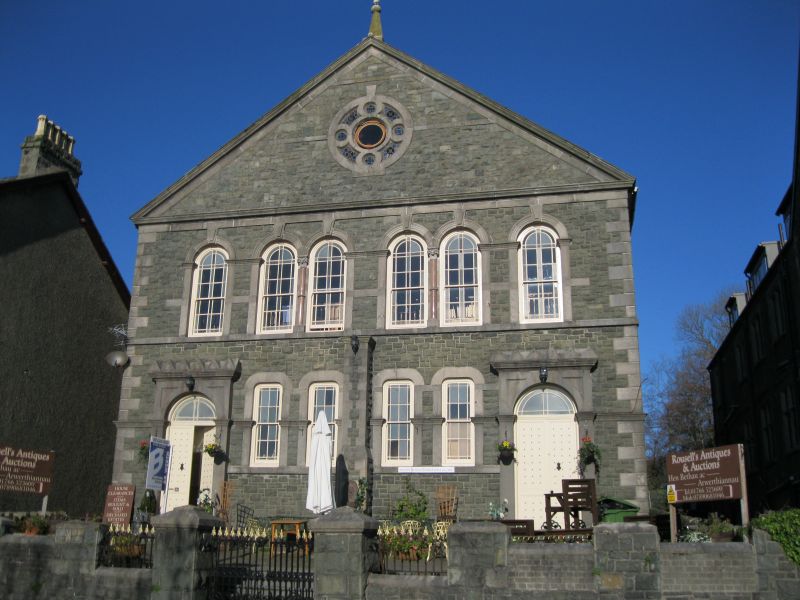 A Calvinistic Methodist Chapel: registers show that a chapel was in existence as early as 1813, although the Religious Census of 1851 suggests that the chapel building was erected in about 1822 - the Tithe Map of 1839 records a chapel on this site. The Sunday School to the rear was built between 1889 and 900. The father of Margaret Owen (wife of David Lloyd George), was a deacon at Capel Mawr, and led a secession from the chapel to build a second chapel (Capel Seion) in 1887-8.

Roughly squared random rubble with ashlar dressings and slate roof. Pedimented gable faces the street, expressed as 2 storeys, and with entrances to either side. The doorways are in slightly advanced architraves, which have decorated entablatures over the round-arched entrances. Between them are paired sash windows with margin lights and depressed segmental heads and continuous sill band and impost band, continued from the doorways. Central pilaster buttress. Upper storey has arcaded segmentally arched margin light sash windows (arranged 1-2-2-1), with continuous sill and impost bands, and keystones linking with the moulded cornice that defines the pediment. Geometric rose window in apex of pediment, which is surmounted by a stone finial. 5-window return elevations, with round-arched windows to upper storey, rectangular windows below - all sashes with margin lights. School room extension to N.

Capel Mawr is a good example of a town chapel of gable-entrance type which uses a simplified Neo-classical vocabulary to create a distinctive and appropriate architectural style. It forms a group with the George IV Hotel, and is an important element in the High Street.