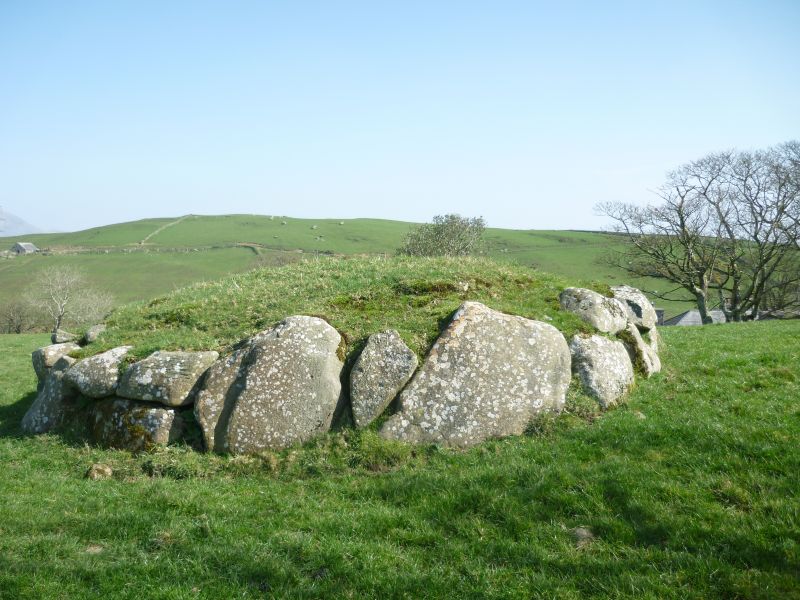 Location: 2km approx. NE of Criccieth, set back to the N of a lane running W from the N of Pentrefelin.

The estate was founded in the early C16, but the present buildings are probably late C16, with additions of c1780. There are 2 separate but connected dwellings on the site, which may therefore be an example of the ‘unit system’ of dual houses, which probably arose in this case as a result of family circumstances at the end of the C16, when it is know that 2 couples (2 generations of the same family) were living here. The easternmost house is almost entirely late C16 (though substantially restored), and although what is now the main house on the site is largely the result of late C18 work, it also incorporates the core of an earlier building of late C16 date.

Eastern building: Roughly courses slate rubble, with slate roof, and end wall stacks. The right hand stack is corbelled out, and is largely a recent reconstruction (though based on the earlier form). Small 2-unit plan, originally with internal cross-passage. Entrance towards centre, with steep split stone voussoir arch (the door itself, which is studded and has fine strapwork hinges, is a late C20 replica of an earlier type). Small window openings on each floor - renewed as pivoting windows with small panes. Inside, the staircase winds up alongside the stack in the larger left-hand room.

Main building:
Exterior: The earliest part of the house is the rear wing to the W. This is probably late C16, but was raised at some time to the height of the frontage range which was added c1780. This range is built of roughly coursed and squared slate blocks, with slobbered pointing and smooth rendered dressings. The earlier rear wing is rougher stonework in smaller blocks. Slate roofs throughout, hipped and with end wall stacks to front block, gable end stack to wing. Front block is a high 2 storeys, 3-window range. Central entrance with recessed 4-panelled door with radial fanlight, flanked by 12-pane sash windows. Similar windows to first floor and in return elevations. Integral rear wing to NW is clearly distinguishable as the earlier phase, and has 2x12-pane sash windows to first floor, which do not align with the lower windows (a tripartite and a 12-pane sash). Lower rear wing beyond was probably added when the house was remodelled in the late C18 to provide service accommodation. Further extensions (a former dairy) connect this building to the other house on the site.

Angular stops to chamfered beams which panel the ceiling in the bisected C16 part of the house to the rear, and chamfered bressumer to wide rear wall fireplace.

An important C16 development of 2 separate but related houses, one of which survives close to its original form; the other house was enlarged at the end of the C18, and is of interest both for the high quality of the C18 work, and also for the way in which the earlier building is incorporated.