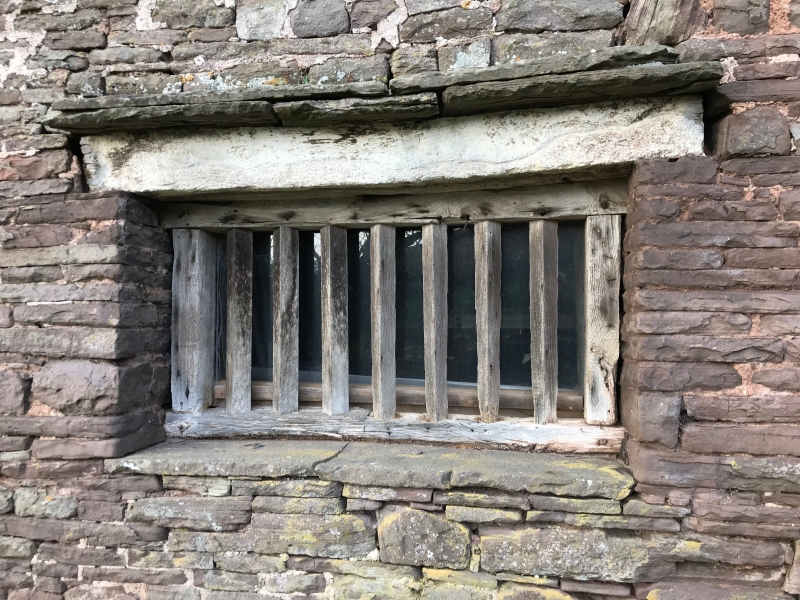 Location: Impressively sited on steeply sloping ground uphill from Cwmyoy Church on the eastern slopes of the Vale of Ewyas; reached via a track from Penywern Farm. Retains stone forecourt wall and boundary wa

Late C16 origins and built in two phases and with some later alterations; the uphill end is probably the earlier part, there is a straight joint between the cross wing and the main range. Also incorporates some medieval work said to have been reused from Llanthony Abbey, for example the archway entrance to the porch.

Substantial stone-built farmhouse with rubble chimney stacks and about a quarter Bridgewater clay tiled roof, but still mostly corrugated asbestos sheeting. L-shaped with a cross wing parallel with the hill and the main range coming away from it. Two storeys and attic with an undercroft at the downhill end. Porch on the front and an unroofed lean-to extension on the downhill end of the rear. The front faces north-east and has an added two storey gabled porch with C13 pointed-arch entrance with the characteristic continuous roll-moulding; to the left of the porch is a flight of outside stairs to a loft door over the byre. Deeply splayed window openings with some C19 fenestration but also retaining diamond-mullioned windows including one, formerly of six lights to the downhill gable end at attic level. Some windows retain Tudor hood-moulds. All windows are boarded over (May 1997). Central ridge stack and lateral stack on cross wing, both are weatherd for thatch.

In poor condition at the time of listing inspection (October 1994), and still so on resurvey (May 1997), but now actively under repair.

The plan-form of this type B longhouse is exceptionally unaltered. Entrance is through the storeyed porch with winding stone stairs. The doorway onto the cross-passage is unusually broach-stopped both at the base and the doorhead. The cross-passage has in-and-out partitions, probably C18. The doorway from the passage into the hall is also remarkable as having the only known elaborately enriched doorhead in the region and is carved with stag, hound/fox, celtic proto-grotesque, harp, paterae and leaves; the door-frame has diagonal stops. The hall has chimney backing-onto-the-entry and broach-stopped cross beams with diagonal-stopped joists; battered walls and deep fireplace with chamfered stone jambs. The dais partition is of particular interest as it is set on a high base and on the uphill side continues above the head-beam on the hall side. One hypothesis for this is that the uphill end predates the present hall and that the back of the dais became the front when the hall was added; further evidence for this is that the dais has straight stops unlike the hall but the same as is found in the present parlour and service room, uphill. It has also been suggested that the original hall may have been timber-framed and rebuilt later in stone. Plank and muntin partition between the parlour and service-room. Spiral stone stairs. C16/C17 tie and collar roof trusses. Byre at lower level to south-east. Interior not available for inspection at time of resurvey (May 1997).

Graded II* because of surviving high-quality detailing and the specially good historic character of the interior. Group value with other listed items at Ty-Hwnt-y-Bwlch Farm.