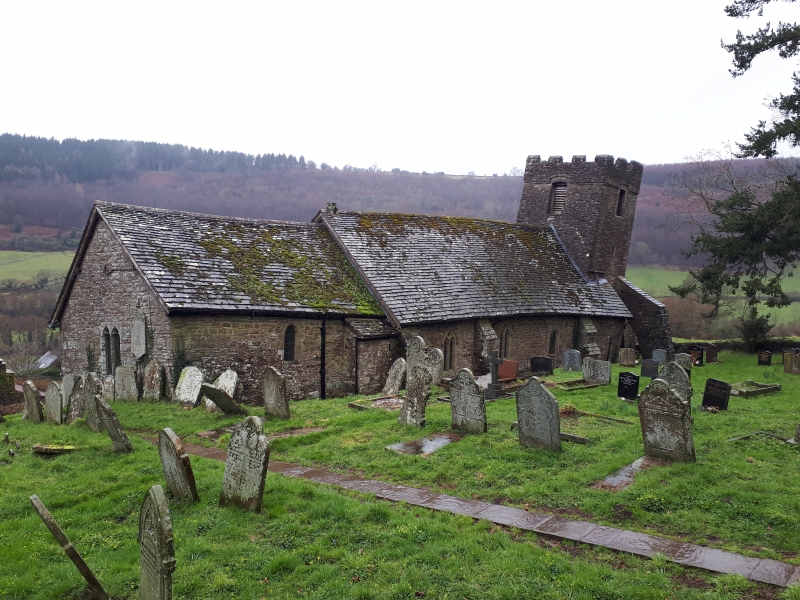 Location: In the centre of Cwmyoy village on the east slope of the Vale of Ewyas. It stands in a churchyard with a fine collection of well cut memorials.

The masonry is largely undatable and most of the features have been replaced but the church appears to originate in the C12 with the arched north west window of the nave being the oldest feature. The chancel appears to be later than the nave, as is the porch. The rood beam and stair are probably C15-C16. The tower is medieval. Restorations are recorded of 1887 by J James Spencer, and 1991 by Hook Mason. Frequent repairs have been necessary because of the ground instability and some of these are dated. The church was under Llanthony Priory until the Dissolution in 1538. It became a Vicarage in 1830 and a part of the larger parish of Llanvihangel Crucorney in 1969. In 1844 it was transferred from the Diocese of St Davids to Llandaff, and in 1921 to Monmouth.

Constructed in local fine grained red/grey sandstone coursed rubble, with stone tiled roofs which were renewed in 1887. The walling is medieval with considerable repairs and rebuilding as a result of ground instability. The church consists of nave, chancel, south porch and west tower with external stair turret. The church is heavily buttressed, with three stepped ones to each side of the nave and one to the south wall of the chancel, and large flying buttresses to the tower, these are all Victorian additions. The nave has three windows in either wall, three identical 2-light Decorated ones which are Victorian; the north west one which is C12-C13; the south east one which is C13-C14; and the 3-light middle window of the south wall which is probably C16. The porch is of uncertain date, it is later than the nave wall with which it has a straight joint, and is older than the C19. It has a probably rebuilt pointed head to the entrance. The chancel appears to have been built separately from the nave. It has a small pointed window on either flank wall and a 2-light east window with cusped heads, this may be C14. The tower is medieval, it is twisted and leans at a considerable angle towards the south west. It is carefully built of snecked rubble with long and short quoins. It has three stages with a drip course separating the first and the second. The ground stage has a Victorian window on the west face, the second has only one small window, the third has large belfry openings with elliptical heads, two have been enlarged. The tower is topped by a castellated parapet.

The interior is very remarkable for the movement it has suffered as a result of the instability of the foundations; the floor is every uneven, all the walls are out of square and the roof is twisted. The walls are plastered and whitewashed, and there are four inserted tiebeams which were probably added in the C16 or C17. The tower arch is very low and appears early; the chancel arch is very plain and appears to have been rebuilt. The roof is of close set scissor brace trusses with the sarking renewed in 1887. The pews and pulpit are 1887, the font is C12, the communion rails are late C17 or early C18 with turned balusters. There are many good engraved memorials on the walls. There are six bells, all dated, 1700, 1672, 1722, 1697, 1700, 1722. A c300 year old set all so close in date is a rarity.

Highly graded as a medieval church with an interesting history, distinctive historic character and fine fittings.