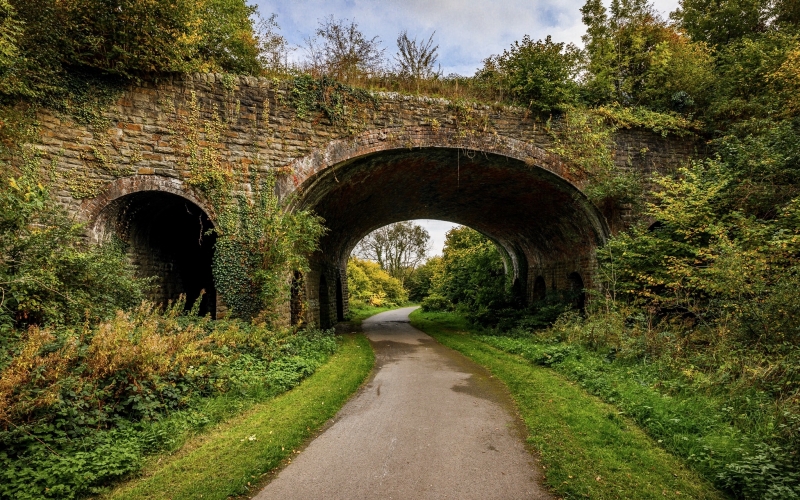 Location: Located S of Rhydycar Leisure Centre and crossing the line of the former Glamorganshire Canal beneath a tall embankment.

The Vale of Neath Railway was begun in 1847 to link Merthyr Tydfil with the ports of Neath and Swansea and was completed to Merthyr in 1853. The engineer for the railway was I. K. Brunel (1806-1859). The Rhydycar skew bridge carried the railway on a high embankment across the Glamorganshire Canal. The first design for the bridge was objected to by the Canal Company in 1849, who demanded a much wider span, of over 12m, which would accommodate the canal at its full width together with the towing path. The bridge was eventually constructed on a skew with one central arch of the size demanded and two additional arches.

A three arched bridge of sandstone and brick with a large elliptical arch to the centre and a round-headed arch on either side, separated by thin, tapering piers. The arches are of red brick, with five courses to the centre arch and three to the flanking arches. The piers, walls and wings are of bullnozed sandstone. The walls curve continuously from the wings to the apex, which is below the level of the embankment carried above. There are three round headed relieving arches with pronounced stone voussoirs linking the central arch transversely to the arches on either side.

Listed as an unusually distinguished railway bridge by the foremost railway engineer of the mid nineteenth century.