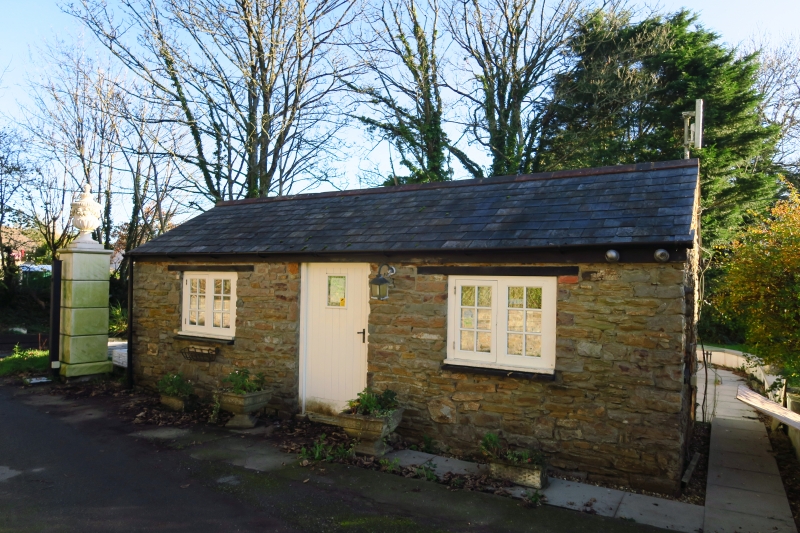 Bonville's Court Colliery operated from 1842 to 1930, during which time it remained one of the most important collieries in Pembrokeshire. It produced anthracite of exceptional quality, which was particularly valuable in the malting trade, being used in SE England and overseas. Bonville's Court was one of the most organised and mechanised of Pembrokeshire's collieries. In 1925 it employed 3-400 men and was responsible for 82% of the coal output of the County. After closure in 1930 its screens continued in use for some years for coal from nearby pits. Several features from the colliery survive at the Tower Pit site, begun in 1847, now within the caravan park: including the heapstead, power house, weighbridge house, pay office, carpenter's shop, and former railway alignments.

The weighbridge house is a small single-storey gabled structure of coursed rubble sandstone with a corrugated roof. There is a central doorway to the front or N elevation with a plank door, and a square window on either side. One blocked window opening can be seen on the W gable end, and another to the rear elevation. The platform for the weighing machine was set into the road in front. The checkweighman's Act of 1860 and succeeding legislation enforced election and payment of weighmen by the miners themselves in recognition of their important role in recording production for the settlement of wages. The weighbridge house contained reading equipment for the weighbridge, the miners' and Company's nominated checkweighmen, and their respective ledgers.

Listed as a rare surviving colliery weighbridge house and for group value within the important Bonville's Court Colliery complex, one of the most significant remaining from the important Pembrokeshire anthracite trade.