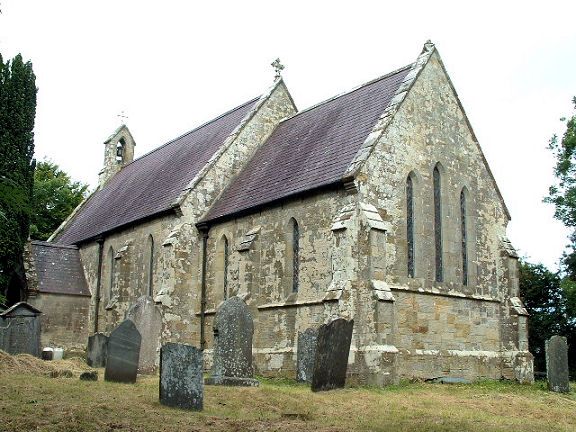 Built 1846-48 on an old site. Architect was John Jones (1810-69), also known as the bard 'Talhaiarn', an assistant architect with Scott and Moffatt in London from 1843. In 1846 Jones and WL Moffat were employed by Rev. robert Miles of The Priory, Cardigan for the design and construction of the Gothic revival styled Cardigan National School. Miles was also the patron for St Michael's. He was from a family in Bristol bankers and a progressive local landowner eager to intrduce the ideals of the new ecclesiogical movement to West Wales. John Jones would later assist Sir Joseph Paxton in the construction of the Crystal Palace and oversee the building of two mansions in France for the Rothchilds. He is however better known in Wales for his compositions of verse and songs.

The interior has survived remarkably intact and displays a simplicity and sparseness correct to its design. The walls are rendered, the ceilings high and open and the windows are recessed with pointed stone arches. The Nave has 5 arch braced collar trusses, stained plain pine pews and pulpit, 5 oil wall lamps, 3 to the north and 2 to the south, and two large iron and brass gothic cornae (six candles), one in nave and one in chancel. Square grey stone scalloped C13 font from the earlier church on thick cylindrical shaft and square stepped base similar to font at Church of the Holy Cross, Mwnt. Stained pine screen, 2m high with half height cplumn shafts, separated nave and N aisle under octagonal cnetre pier with half-pier responds. N aisle has a plain collar truss roof and stained pine pews of a smaller scale than those within the nave possibly indicating the use of the N aisle as a schoolroom. Pointed chancel ach with half column shafts. Chancel windows all hae stamped quarries. Stained pine choir stalls with large poppyheads. Step to sanctuary and pine alter rails.

Listed as one of the first Gothic churches in Wales, constructed to a high standard of correctness and form inline with the ideals of the ecclesiological movement and surviving with a largely intact interior and without later alterations. It is also significant for its connections to John Jones and is the only building designed exclusively by him.