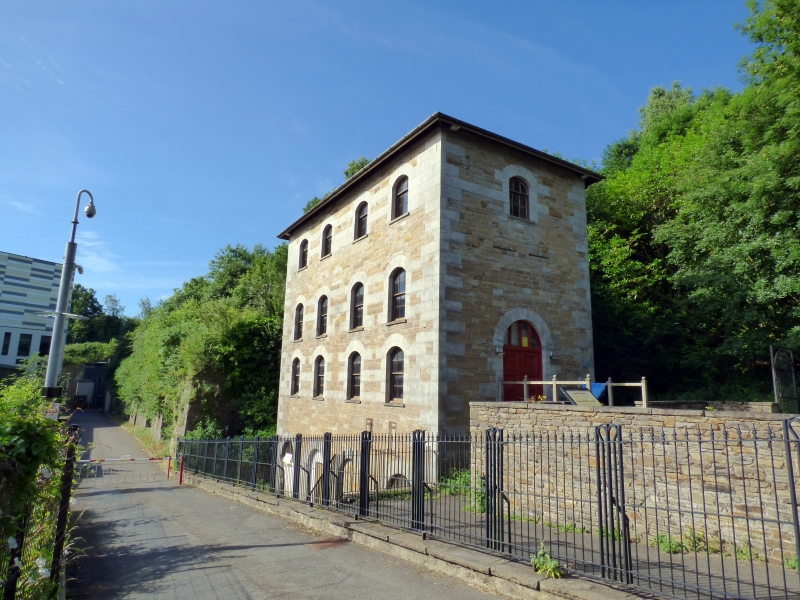 Location: Located at the W of Merthyr College and just N of the remains of the Ynysfach blast furnaces.

Engine House, built in 1836 for the adjacent furnaces of Ynysfach Ironworks, a subsidiary of the successful Cyfartha works owned by the Crawshay family. The Ynysfach Ironworks were founded in 1801 when 2 blast furnaces were built to plans by Watkin George, engineer and foundry manager at Cyfarthfa from 1792. In 1836 2 more furnaces were built together with the engine house which replaced an earlier one painted by Penry Williams c1815. The new engine house contained a beam blowing engine made at the Neath Abbey Ironworks. The Ynysfach works closed in 1874 and the engine house fell into disuse. It was restored between 1986 and 1989 and converted to a heritage centre and offices. The building was formerly part of the scheduled ancient monument Gm 331, which was revised to exclude the building following its conversion to a heritage centre and offices. The heritage centre was closed at the time of survey (2002).

Blast engine house, 4-storey rectangular building of dressed blue Pennant sandstone with white-ashlared limestone quoins and dressings and hipped slate roof with deep eaves, in the house-style of the Crawshay ironworks. Windows have segmental heads with deep voussoirs and dressings, and small-paned replaced sash windows. N elevation has the main entrance through a round-headed arch approached by a modern stair, and one window above. The principal facade, to the E, is 4 bays long with equally spaced windows on 3 storeys, a semi-basement with round-headed arches, and cast iron brackets at the N end. The S end, facing the furnaces, has no windows. The W elevation has 6 irregularly spaced windows, cast-iron fittings, and a tall blocked archway at the S end.

Not accessible. Said to have new floors and partitions inserted, the bob wall for the beam engine passing through the centre of the building, and cast iron brackets for the engine''''s supporting structure and components visible in many places.

Listed grade II* as one of the most important remaining ironworks blowing engine houses in Wales, and as the prime example of the architectural house style of the Crawshay ironworks.