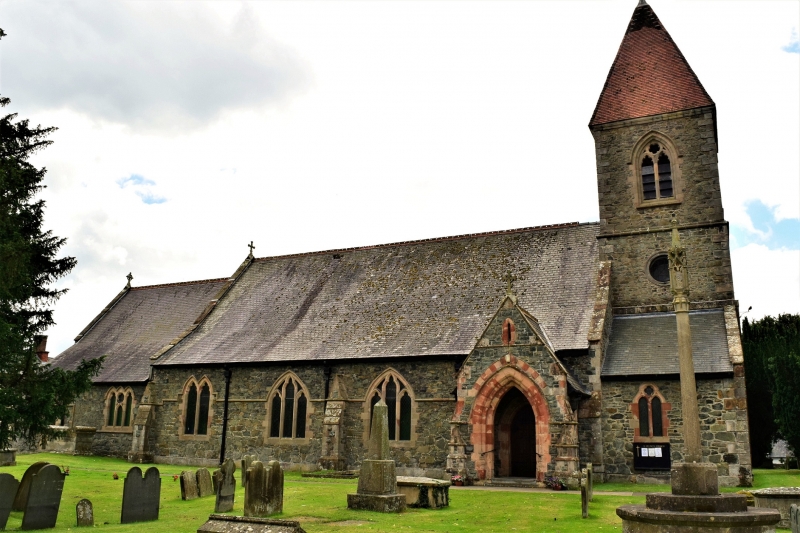 Location: Set back from the street in a churchyard of roughly circular shape.

The existence of an early church on the site is known from documentary record (earliest reference in 1265), and the appearance of a pre-C19 church was recorded in an engraving of 1800, and in plans of 1799. This small church (comprising nave with western belfry and integral chancel, with N chancel aisle), being considerably decayed, was demolished in 1802. It was replaced by a larger building in a Neo-Classical style, built of stone and comprising W tower with flanking vestries, a wide nave (galleried internally), and a short chancel. In 1875 this church was itself radically reconstructed, to designs of Edward Haycock of Shrewsbury. His remodelling work retained the west tower and its flanking vestries, though the tower was given a spire, and the vestries were re-roofed to a steeper pitch; the wide nave of the earlier church was re-modelled to accommodate 2 aisles and a steeper roof; the chancel was probably entirely rebuilt, and all windows and doorways were reconstructed in a robust gothic idiom.

Random rubble with freestone dressings and slate roofs with red tiled cresting. Comprises nave with lean-to aisles (under a continuous roof), west tower with short spirelet, chancel with lean-to N vestry aisle. 3-stage W tower with its flanking vestry and porch is substantially of 1802: angle quoins, and string courses to define the stages (the lower string-course replaced 1875); oculi and clock in second stage are of 1802; the W window was inserted to replace a doorway in 1875. Flanking porch and vestry also have angle quoins, but were re-roofed and re-windowed in 1875. The shallow gabled porch to the S was also added at this time. N aisle has gabled porch to W with red sandstone triple chamfered arched doorway, and is divided by buttresses into 3 bays with windows of early gothic type, linked by a continuous impost band. S aisle is similarly detailed. Chancel has lancet windows of 1 and 3 lights beneath banded voussoir arches linked by continuous sill bands, and stepped impost bands. Chancel vestry has shouldered doorway and composite triple lancet window with central foiled light.

West tower arch of 1875 (red and white banded stone, double chamfered, with corbel heads to hood mould), inserted in a higher segmental recess which is probably a relic of the 1802 church. Nave arcades of 4 bays: alternately octagonal and cylindrical shafts carry double chamfered arches with continuous hood moulds. Stone corbels carry cusped wall posts of ornate timber roof trusses, which have raking struts to tie beam, and king post with collar forming a cross. Moulded chancel arch dies into plain responds; wagon roof to chancel. Tiled floors throughout, with some encaustic tiles to chancel and sanctuary. Organ of 1923, replacing an earlier one of 1866. Pews, choir stalls and altar rails probably of 1875; pulpit with marble inlaid panels also of 1875. Reredos, with figures of Celtic saints flanking a low relief panel of Christ at Tiberias in richly worked canopies, with flanking traceried panels, 1896, designed by F.R.Kempson, the figures carved by Earp, and the flanking panels by May and Collins of Tewkesbury.

Stained glass: E window, 1859 by Hardman (re-sited from the Venetian window of the earlier church); SE window, 1875 by Heaton Butler and Baine; W window, 1907, by Powell.

Memorials: At the E end of the N aisle, 3 recumbent effigies: Arthur Price of Vaynor (d.1597) and his two wives. In the pre-1802 church these figures were on a raised tomb, said to have been at the E end of the N chancel aisle; removed when the church was rebuilt, the figures were eventually given to the Powysland Museum, Welshpool, and were returned to the church in 1948. In the chancel: William Owen of Glansevern, d.1837, a draped urn with low relief bust, by Baily of London, 1838; various late C18-early C19 wall memorials in the base of the tower, including a large marble sarcophagus-shaped monument to members of the Owen family of Glansevern, d.1717-1829.

Prominent in the centre of the village, the church is of particular interest for its history, unusual for the scope of its successive reconstructions. The robustly detailed 1875 church includes some fine memorials from its predecessors.