Capel Salem with railings to forecourt 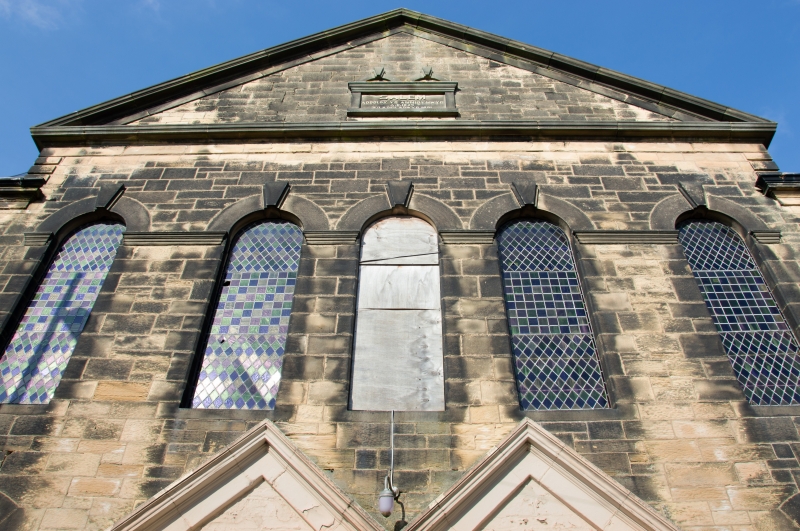 Location: A prominent feature of the street, opposite Nant Road.

The chapel was built in 1891 by John Harrison of Coedpoeth, replacing an earlier chapel built on the same site in 1858.

Coursed and squared stone with freestone dressings including angle quoins; slate roof. 2 storeys, with pedimented gable facing the street. Paired central doors (each 6-panelled with round-arched fanlights) in painted stone architrave with paired steep pediments. Segmental-headed windows flank the entrances. Upper storey has triple round-headed windows to centre, and similar outer windows aligned with the lower windows. All these have keystones to arched heads and are linked by a continuous impost band. Tablet with name and building dates in apex of gable. 5-window returns have 12-pane sash windows with flat stone lintels to ground floor, and similar sash windows but with rounded voussoir heads, above. Lower school room to the rear of the chapel is 2 storeyed with 2x2-light windows with small paned lights above the transom in each elevation.

Entrance lobby with stairs to gallery; body of chapel has raking horse-shoe gallery, stepped down to form the organ loft across the N. Supported on fluted Corinthian cast-iron columns, the gallery has panelling enriched with low-reliefs, and blind turned balustrading, a detail which is echoed in the set fawr. Organ (with painted pipes) housed in reeded arched recess. Ceiling has inset boarded borders, and ornate central 'rose'. Original late C19 seating survives throughout; boarded dados, then lined-out rendered walls. Some coloured stained glass in S windows, and top lights of E and W windows.

Listed as a fine example of a late C19 chapel, retaining a richlydetailed original interior of high quality. A prominent feature in the main street.