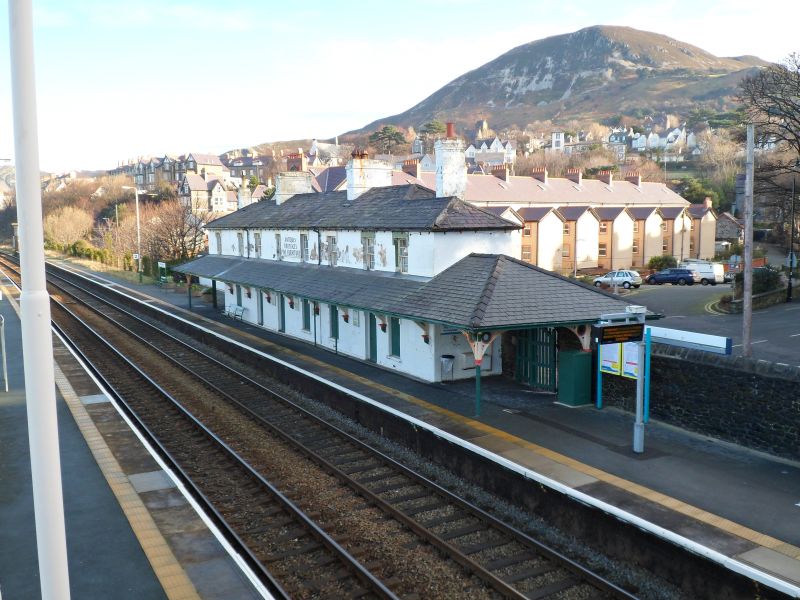 Location: Located at the N edge of the town at the bottom of Paradise Road.

Built by the Chester to Holyhead Railway as part of the Chester to Bangor line, under construction in 1845 and opened in 1848. The railway was proposed to improve links between London and Dublin. The bill was passed in July 1844 with Robert Stevenson as engineer and Francis Thompson of Derby as architect. Originally T-shaped, extruded corner additions were added later C19 on the roadside; these are shown in the 1888 OS map.

2-storey T-shaped building of rubble, with scribed render to all but the central rear (road-facing) side. Shallow-pitched, hipped slate roof with slightly oversailing eaves; 2 central and 2 end chimneys, all rendered and with cornice bands. Near-symmetrical 8-bay platform facade with marginally-glazed plain sash windows to the upper floor; these have plain stucco returned labels. The ground floor has 2 central entrances with labels as before and contemporary 4-panel doors. To the R, 2 boarded windows with a further entrance and window beyond. To the L a blocked former entrance and a further entrance to the final, recessed bay. Continuous slated verandah-type roof to ground floor, returned around the sides and supported at the corners by cast iron braced columns and from a series of regularly-spaced corbelled brackets along the facade; pierced geometric decoration. This verandah is returned around the W side to the rear where the platform entrance is. This is segmental-arched and chamfered and retains its contemporary wooden slatted gate with simple shaped finials. A tall, stone-coped wall continues from the entrance westwards (along the rear of the platform) for approximately 10m where it steps up at a footbridge over the tracks. On the E side of the building, a similar, adjoining wall stretches for approximately 15m along the rear of the platform where it steps down and terminates. There are 3 segmental arched openings to this stretch of wall which are now blocked and appear at niches.

Included for its special interest as a mid C19 railway station on this important line retaining good external character.