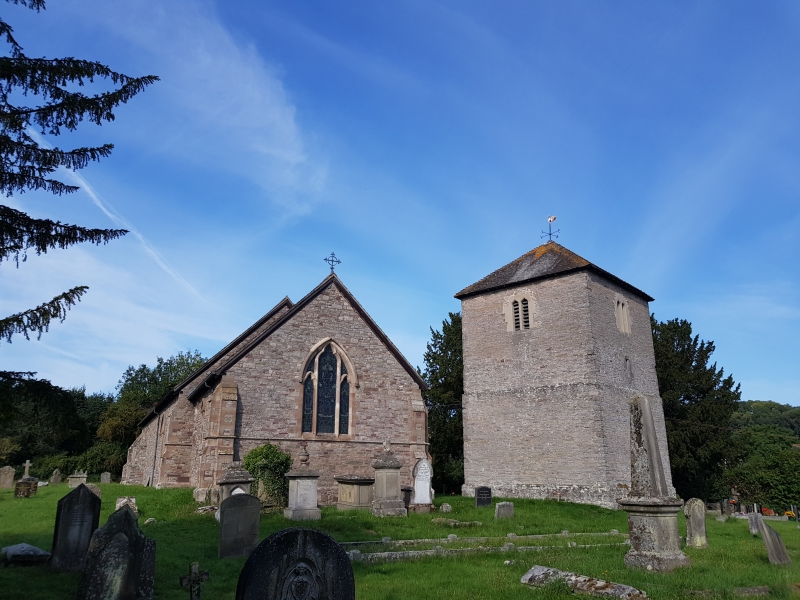 Location: Located behind the road side development of Church Street, adjacent to the large moated manorial site.

Parish church in the diocese of Swansea and Brecon. Twelfth century, rebuilt on the same foundations in 1889-90 by Nicholson and Sons architects of Hereford. Re-ordered by G. Pace in 1969.

Red and grey local sandstones, concrete tiled roof. Nave and Chancel in one long cell; the chancel narrower and lower. The walls of the west end of the chancel on both sides and the W wall of the nave are of medieval work. N door in a part timber-framed gabled porch, with post and panel sides and windbraced roof, re-using some medieval timbers, replacing the medieval stone porch. Dedication cross on jamb to right of door. Windows progress from simple Norman style at W end to 2-light Decorated before the chancel arch. Three-light E window, and 2 tall plain lancets at W end.

Glass: E window memorial glass of 1928, an Ascension with SS Mary and David.

Listed for its surviving medieval work, and internal fittings of special interest. Group value with the Detached Bell-tower.