Railway Bridge East of A 470 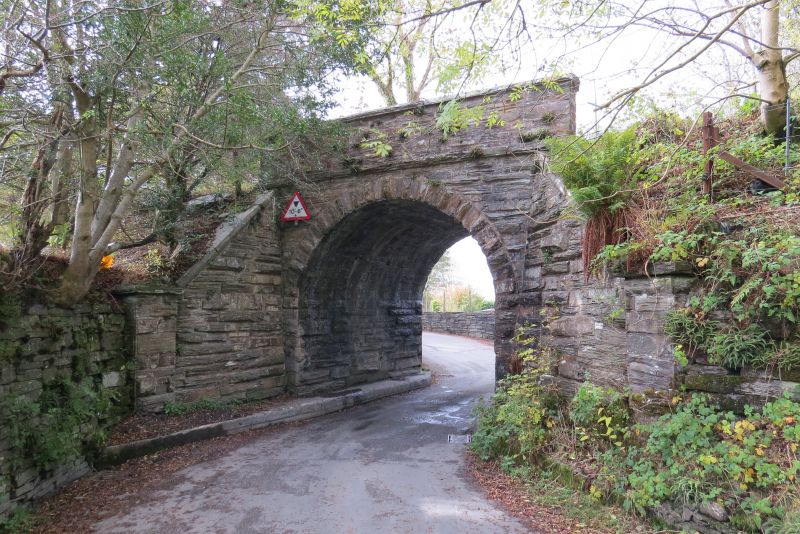 Location: Spanning a narrow unclassified lane leading NE from the village towards the locality of Tryfael; the road bends sharply under the bridge and climbs up to the L beyond.

History: Late C19 railway bridge of special historic interest for its association with secret operations during World War II. Following the fall of France in 1940 the decision was taken to evacuate National treasures to safety from invasion and bombing in secret underground locations. The disused Manod slate quarry was chosen to house the National Gallery's collection and, in specially designed and disguised cases, roughly 2,000 paintings were transported by lorry to the remote quarry. Negotiating the sharp bend under this bridge on the last stretch to Manod was notoriously difficult for the larger lorries. Sir Anthony van Dyck's famous equestrian portrait of King Charles I had to be carried at an angle to reduce its height. The road under the bridge was also lowered by nearly 0.9m and concrete reinforcing aprons were built. Despite these measures there was still not enough clearance; the lorry finally just scraped through after air had been let out of the tyres. A photograph of this difficult manoeuvre has become a famous image of the War.

Description: Late C19 single-span railway bridge of rough-dressed, snecked stone. Pronounced voussoirs to the arch with projecting string-course above. Curved concrete aprons of about 0.6m deep and 0.6m wide support the bridge's foundations; the roadway dips down as it passes beneath the bridge arch.

Listed for the special historic interest associated with the bridge.