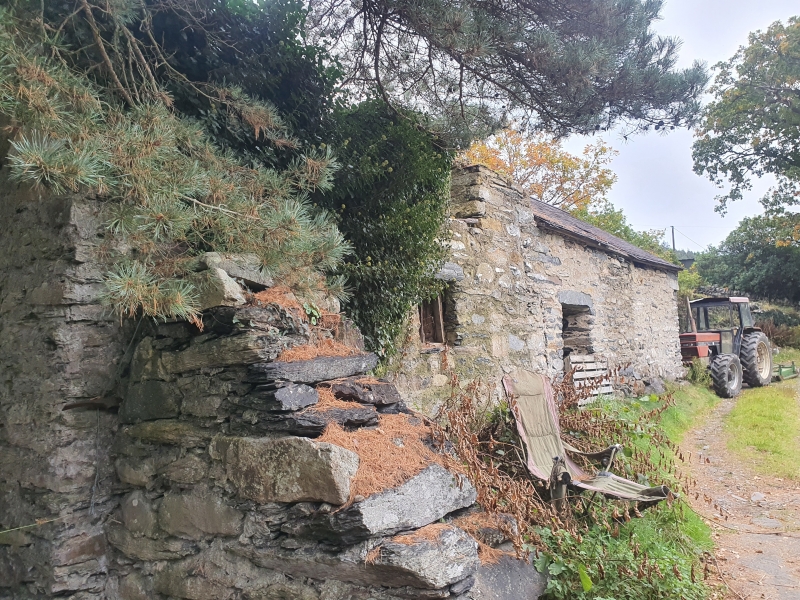 Location: Located 1.5 km W of Trefriw immediately to the N of the Trefriw-Llyn Geirionydd road, where it bridges the Afon Crafnant; set against the slope of a hill facing a random-cobbled enclosure.

Early C17 storeyed end-chimney house of inside cross-passage type; a later C17 service wing to the rear forms a T-plan with the primary block. Single-storey C18 brew/wash house addition at the SE corner. Rubble construction with boulder foundations; pebble-dashed main and gable faces. Slate roof with rubble end chimneys, that to the R (former hall) the larger, that to the rear (service) wing squat; plain capping and weathercoursing. 2-window front with off-centre entrance (to L), stepped up and with original boarded and studded oak door; contemporary pegged frame. Recessed late C19 sash windows to both floors flanking the entrance, those to the ground floor with 2 panes above 3, those to the first floor of conventional type and placed under the eaves. Further sash window to first floor of W gable and modern windows on both floors to rear, the latter in primary openings with pronounced projecting lintels and cills. Single-storey service wing to rear built into the hill. This has a C19 4-pane sash in a late C17 gabled dormer facing E; later 2-pane window to ground floor W.

The wash/brew-house adjoins at a right-angle with the main block, which it partly overlaps to the R; construction as before with steeply-pitched roof continued to the E as a catslide over a later outshut; tall, rendered stack to SE gable. Central boarded door to main (farm) side with small, flanking 4-pane sashes, as before with similar arrangement at rear, though modern.

Original hinge post and block arrangement to door; crude later C17 oak inner porch. Whilst the partitions have been replaced (and that to the former hall, to the R, moved forward), the cross-passage arrangement is nevertheless still apparent and the opposing entrance survives. This has a Tudor-arched doorhead and contemporary pegged oak frame and has a later boarded door; it now leads into the rear service wing. Early C19 plain stick-baluster stair in former passage; boarded partitions to hall and former parlour. The latter has a plastered ceiling and C20 fireplace. Heavy beamed ceiling to hall with stopped-chamfered beams and joists and a wide fireplace with bressummer; a mural winding stair is known to exist to the L of the fireplace, though this has been plastered over. Cruder stopped-chamfered beams and a wide fireplace with bressummer to ground floor room of rear (service) wing. 4-bay roof with pegged, chamfered trusses of tie-beam and struts type.

An early C17 storeyed house retaining much of its original character.

Group value with other listed items at Cwmannog.