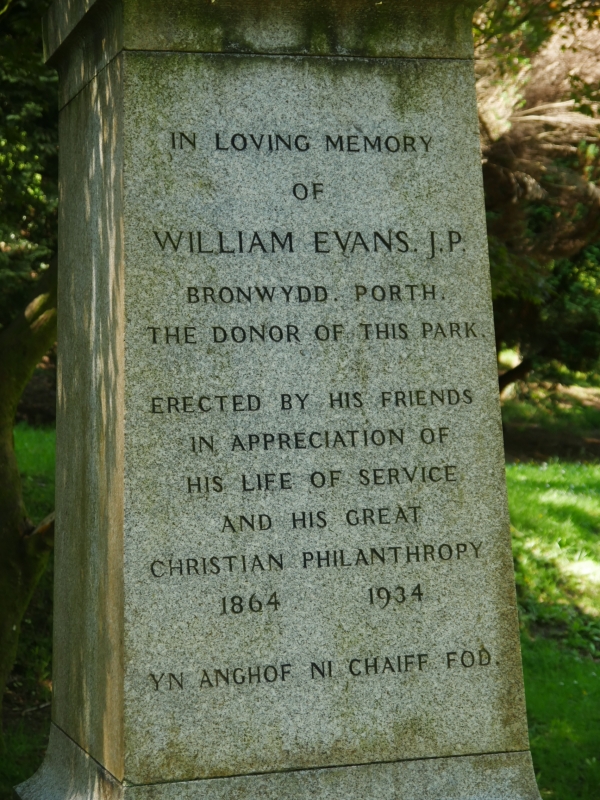 Location: Located to N of entrance to Bronwydd Park and to W of Bronwydd (house).

Erected after death of William Evans in 1934. He was born in Pembrokeshire, was one of the founders of the firm of Thomas and Evans which built and owned many businesses in Porth and elsewhere in the Rhondda and S Wales, and was a great benefactor to the town. Bronwydd (house) was built for him in 1913/14 and he donated land for the park to the town in 1920. Represented Porth on Glamorgan County Council for 24 years, served on Appeal Tribunal during first World War, appointed to Justice Bench 1920.

On 2 square steps, a granite pedestal with moulded plinth and cornice and inscription panel between 'In loving memory of William Evans JP Bronwydd Porth the donor of this park. Erected by his friends in appreciation of his life of service and his great Christian philanthropy 1864 - 1934 yn Anghof ni Chaiff Fod'. On top a cast bronze bust, an apparent likeness, by A Bertram Pegram, FRBS, 1873-1941. Pegram was also responsible for the sculptures on the National War Memorial at Cardiff.

Listed as part of this sculptor's oeuvre and for its significance in commemorating an important local figure; has group value with gates to Bronwydd Park and with Bronwydd (house) and its entrance.