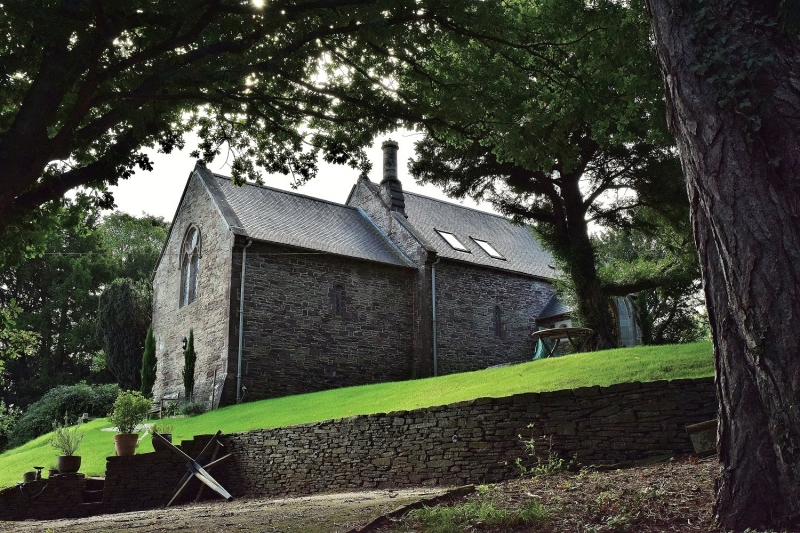 Location: At Oldcastle which is about 4km north of Llanvihangel Crucorney village.

Said to have been rebuilt in 1864 with some ancient features incorporated, but it seems more likely from the fabric that C12 masonry does survive, particularly suggested by the north wall and the rere-arches of the nave windows. The restoration of 1864 appears to have replaced all the windows and built the porch and bellcote, as well as fitting out the interior. It is said to have been done by J P Seddon. There was a further restoration in 1933 by J Newton Jones, but the impression is of a church unaltered since 1864. The parish was transferred from St David's to Llandaff in 1844, It was joined with Lower Cwmyoy, Llanthony and Llanfihangel Crucorney in 1969 and has been in the Diocese of Monmouth since 1921. The church was closed in 1987.

Thinly coursed red/grey sandstone rubble with Welsh slate roofs. Nave, separate chancel, south porch and west bellcote. The masonry is much obscured by plant growth. 3-light window in south wall of nave, 2-light with roundel over in west gable, single light Norman type arched window in north wall of nave, and another in the chancel. 2-light windows in east and south walls of chancel. All windows are externally Victorian and have plate tracery except for the single light ones. The gabled porch has quatrefoils in the flanking walls and a pointed entrance arch. Bellcote on west gable with two bells and quatrefoil in gable above.

Access to the interior was not possible at resurvey (April 1997). The rere-arches of the nave windows appear to be of Norman type. Victorian arch braced collar beam roof with diagonal sarking and quatrefoiled wallplate to the nave, Victorian waggon roof to the chancel. Victorian pews. The font is said to be Norman (not seen at resurvey).

Include as a partly medieval church restored in 1864 by J P Seddon.