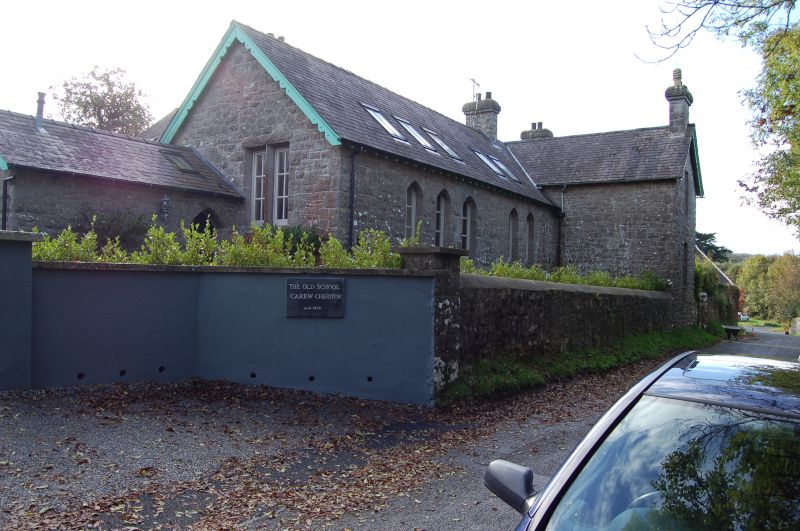 Location: In the village of Carew Cheriton about 100 m N of the Church. There is a small playground at the N of the school and a garden S of the house.

Following the 1870 Education Act, Carew National School was built for £636. The architect was J W Ladd of Pembroke. The School was opened on the 5th of February 1872. It contained a classroom for infants, two classrooms for older children, and a teacher's house. The school remained in use until the 23rd September 1940, when it was temporarily closed because of its proximity to Carew Cheriton Airfield. It was then used as a sick bay for airmen. It was re-opened after the war and continued in use until 1953. The school and the teacher's house are now two private dwellings.

The school and the teacher's house adjoin as an L-shaped group, the house planned blind-back to the school. The house is of two storeys and the school is single storey. The house has a small front wing and faces a small private garden to the S. The school and its yard are to the N.
Both buildings are in hammer-dressed limestone with large irregular stones mixed with smaller masonry in informal courses. Slate roofs. Chimneys in similar masonry. The school has tall windows in pairs with two-centred arched heads. The house has sash windows with lintels and two-centred relieving arches in the same limestone as the masonry generally. The main door of the house also has a two-centred arch.

Listed as a well-preserved village school and teacher's house of the 1870 era.