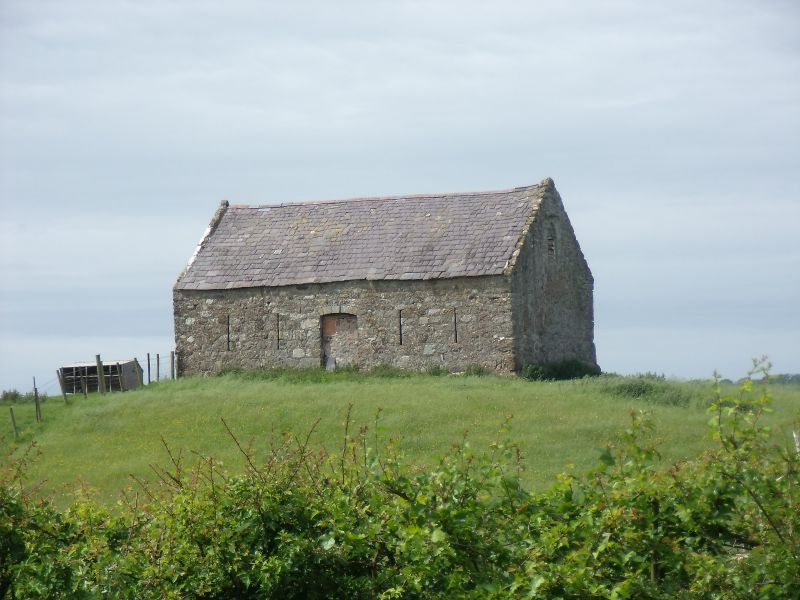 Location: Situated on the summit of a knoll some 300m SW of Llanfair Hall and some 600m E of the Church of Saint Mary at Llanfair-is-gaer.

C17 field barn with front wall probably rebuilt in C18. Part of the Llanfair estate owned by the Griffith family from the C16. End gable incorporates a fine C14 traceried window assumed to come from Llanfair-Isgaer church, as the tracery matches carved detail on the font. John Griffith of Llanfair is known to have restored the church in the early C19.

Shaped coursed rubble stone to front, rough rubble elsewhere. Slate roof with rough stone coping to gables. Some 13.7m by 6.8m aligned NE to SW. The SE wall is said to be thinner than the others and to be of C18 origin. It has a central cambered-arched door with stone voussoirs (now blocked) and two ventilating slits each side. The other walls are thicker, the NW side having a lower central door and two rows of ventilation slits. The SW end is blank. NE end has an inserted C14 window high in the gable. This single wide light has pointed head and blank tracery of ogee flowing type, found in Anglesey and also on the font in Llanfair Isgaer church.

Not inspected. The roof is said to be of four bays, two central trusses of C17 type with mortices for removed collars, the outer ones with applied collars probably C18.