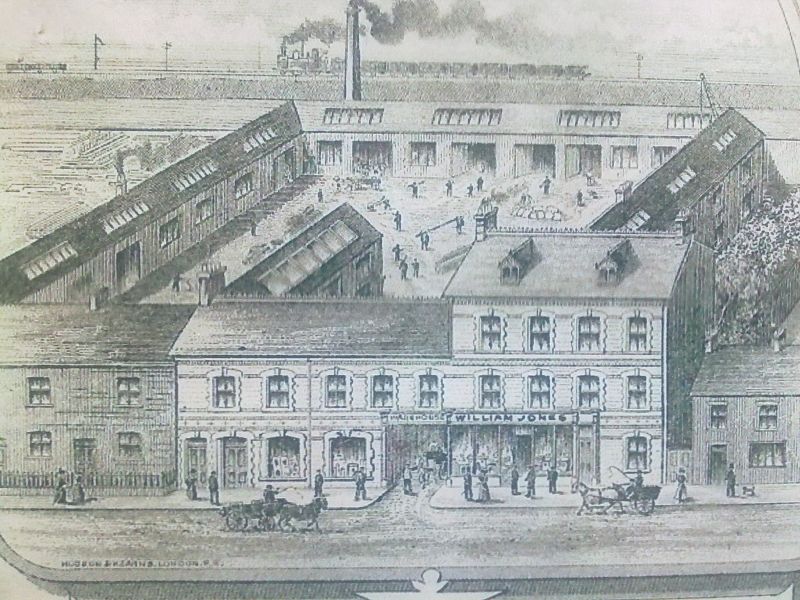 Location: Situated in the centre of Y Felinheli, some 150m SW of War Memorial, on the SE side of main street.

Former large later C19 shop and warehouse selling household goods to domestic premises and the farming and shipping industries. Established by William Jones and subsequently run by his son Rodger and daughter Annie. Decorative brickwork similar to that at railway station of 1874.

Yellow brick with patterned bands in red-black brick. Slate roof with some surviving crested ridge tiles and yellow brick corniced end stacks, also patterned. Shop with accomodation in right hand block, warehouse and stores in left hand range. Three-storey, 4-window range to right and 2-storey, 4-window range to left, all of a single build. Ground floor of right range has house door to right, with iron rails in front, then broad timber shopfront across other three bays and continued to include the throughway under right bay of two-storey left range. Painted timber with four panelled pilasters, fascia divided by console brackets over pilasters, and moulded cornice. Door with overlight between pilasters to right, then three big plate-glass panes to shop-window (originally there was a recessed entry between 2x2-light shopwindows) then throughway with pilaster each side. To left of throughway are two windows, then a window paired with a door, the windows plate-glass two-light, with cambered head to each light.

A large late Victorian emporium with much decorative brickwork and original shopfront, all remarkably intact. An ambitiously-scaled commercial building for a relatively small settlement.