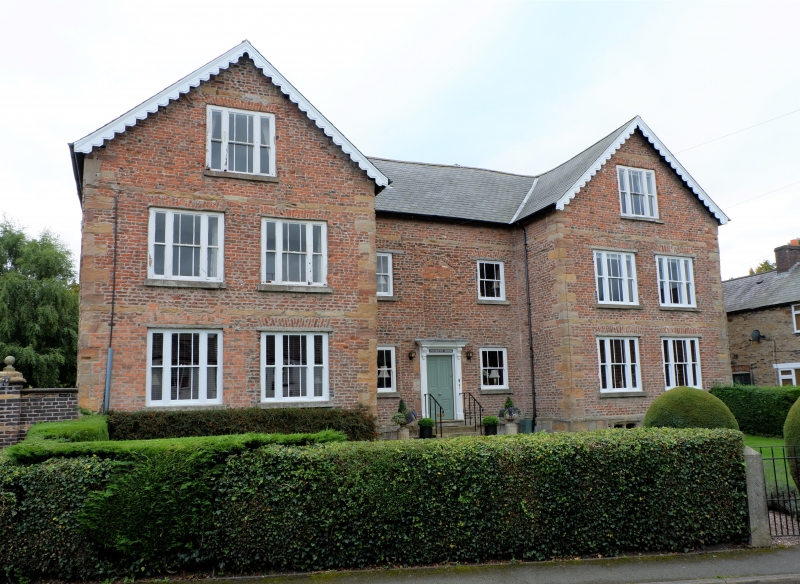 Location: Near the E end of the High Street, approx 70m from the junction with Northop Road. Set back from the street and facing N.

The house was probably first built in the C16 when it belonged to the Billington family, owners of the manor of Northop. However, the symmetrical Renaissance-style plan with end wings is most likely to be early C17, and inside the house is a Jacobean staircase of 1620-30. In 1670 the house was purchased by Richard Whitley, Deputy Postmaster General of England. Timber and slates were purchased in order to rebuild the house on its existing foundations and incorporating the staircase. It had a date over the front door of 1673 and was known as Ty Mawr. An adjoining coach-house was built at the same time. In the early C18 the house passed through marriage to the Earl of Plymouth. Soon after, it was referred to as The Yacht, an ale house. In 1776 it was one of a chain of coaching inns along the road from Chester to Holyhead. It remained an inn until 1839, but by 1871 it was a private house. In the late C19 the exterior was remodelled, with new windows etc.

Large house of 2 storeys and attics with symmetrical Renaissance-style plan; central block with gabled wings advanced to front. Central staircase outshut to rear, and adjoining coach-house range to rear of E wing. The front is of hand-made red brick under slate roofs with buff stone quoins and banding between storeys, stone plinth and scalloped bargeboards; large brick chimney towards L to rear roofslope. Stone steps to central doorway; panelled door in renewed classical-style doorcase with bracketed hood. The entrance is flanked by 2 almost square horned sash windows. These are matched to the 1st floor, between which is a former narrow opening with segmental brick head, now infilled with brick. To each side, the gabled wings have tripartite horned sash windows with gauged brick heads. Two windows to ground and 1st floors and single attic windows. The window to the bottom L has a segmental brick head. Two stone mullioned windows to basement of R wing, both 2-light with chamfered mullion and moulded head. Attached to L of front, boundary wall in red-brown and yellow brick with banded gatepiers with moulded yellow brick copings, and simple wooden gates.

The E and W ends and rear of the house are roughcast. No openings to W end; small segmental headed light to far L of E end with C20 glazing. Small attic light to rear of E wing. Wide 2-storey staircase projection to centre of rear, with pair of small-pane sashes to R with single sash above. To the L is an added 2-storey flat-roofed block with C20 windows and a doorway into the E side. Further single-storey flat-roofed extension to L with door and window. Adjoining this is a narrow range at right angles (once a tack room), of blue brick under a slate roof with brick end stack to R. Two units, each with a planked door to R and 4-pane window to L, all with segmental yellow brick heads. Rubble wall to rear with 2-light casement window.

Adjoining the rear gable of the E wing is the 2-storey coach-house, of the same brickwork as front with buff stone string course and quoins on a high stone plinth and under a slate roof. The E side has a wide segmental-headed carriage entrance offset to the R, with double planked doors. To its R is a planked door with overlight under a segmental brick head. Immediately above is an inserted 1st floor door. Loft hatches to L and R. The S end has 2 narrow segmental-headed openings, now infilled; within the R blocking is a 6-pane window, under the L is a pair of planked doors. The W side has 4 ventilation slits to the upper storey above the buff stone string course. Blocked doorway with timber lintel to L of ground floor and infilled recess to R.

The front door leads into a central stair-hall with Jacobean open-well oak staircase to R. It has flat shaped and pierced balusters, square newels with carved motifs and large decorated finials, and a moulded handrail. Detail throughout the house includes large chamfered spine beams (of the 1670s), with either cut or run-out stops, panelled doors in moulded frames, and wooden floors of c1750. To the L of the stair-hall is a room with 2 spine beams and a stone fireplace to the E with replaced Tudor arched lintel and moulded mantel. A passage in front of this room leads into the dining room, which used to be the bar. It has a single deep-chamfered spine beam and a large fireplace to the rear wall with arched timber bressumer. New brick skin to rear of fire-place with bread-ovens to each side; segmental brick head to R and a concrete hood to L. Original brick-lined chimney with arched flues leading into it from ovens. Further large reception room to R of stair-hall with 2 spine beams and 1750s partition towards rear. Grey marble fireplace to end wall with Tudor-style decoration. C20 bathroom at mid-level off staircase. First floor has similar arrangement of rooms to ground floor, with spine beams and segmental-headed brick fireplaces. The staircase continues to the attic storey, but it is curved and the newels are plainer. The attic storey is open to the roof with large rooms to L and R. The roof has 2 large purlins to each pitch of main range and wings. The structure has been further supported in the late C20.

The interior of the coach house has been divided by a later brick partition. The 1st floor is missing, but the cross-beams still survive; 2 purlins to each roof pitch. To the N end is a narrow 1st floor fireplace with arched head and a blocked opening to its R. It is not original, showing that accommodation was a secondary use.

Listed grade II* as a fine large town house with C16-17 origins, which was substantially rebuilt in the late C17, and retains a good Jacobean staircase. Also listed for its historic interest as a coaching inn on an important road.