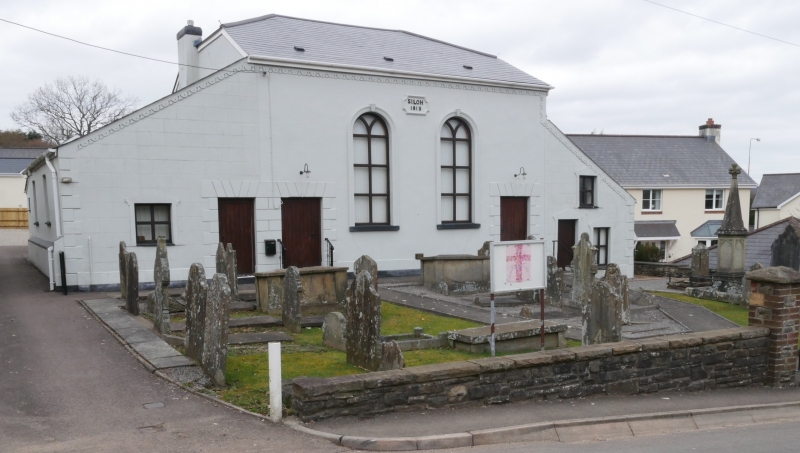 Location: In the small hamlet of Gelli-groes, on a side street N of the main Newport Road, set back from the road within a small walled graveyard with houses close on each side.

Founded as a daughter church to Bethel Mynyddislwyn by John Davies in 1811, chapel built 1813. Presbyterian/Calvinistic Methodist. Plaque in Sunday School to Aneurin Jones (1822-1904), bardic name Aneurin Fardd, author, poet and critic, friend and teacher of the poet Islwyn (William Thomas 1832- 1878 born at nearby Ty'r Agent). Aneurin Jones was part of the Eisteddfod revival movement and an adjudicator at Aberdare Eisteddfod in 1861. He was owner of nearby Half Way House public house and Gelli-groes Mill and later emigrated to America where he became chief bard of the USA as well as superintendent of Brooklyn Park New York, Local tradition has it that some of the inscriptions in this cemetery are the work of Islwyn; some of his poetry was reputedly printed at a press in Gelli-groes.

A small chapel, side facing onto road. Of stone scored-rendered with hipped artificial slate roof. Main chapel building has 2 full-height round headed windows with tooled sills and moulded surrounds incorporating a keystone; moulded date plaque 'Siloh 1813' between; replaced glazing. At each end are doorways with rusticated surrounds, replaced boarded doors. Attached at each end but not symmetrical are lean-tos: to left the Sunday School with separate similar doorway and small pane window with moulded surround; further doorway and windows to right wing, reputedly formerly used as a dwelling by the minister. Continuous moulded eaves band extends across the whole frontage and the lean-tos have rusticated quoins matching the main door surrounds. Deep plinth and side casement windows to Sunday School wing; original 6/6 pane sash windows to rear.

Interior has 3-sided gallery with wide-panelled front and central clock, slender cast iron columns. Raked pews to each floor. Part glazed entrance lobbies with 4-panelled doors are at the front either side of the platform; central pulpit has a high arched panelled reredos behind with inscription painted above; no set fawr. To rear the part blanked out 8-pane windows light the rear interior. At front are the boarded stairs to gallery. Interior of Sunday School/Vestry wing has boarded dado and fireplace in side wall formerly shared with chapel.

Listed as an interesting early C19 chapel and for its historical associations with the poet Islwyn and his mentor Aneurin Jones; group value with the pair of table tombs and Heather Cottage opposite.