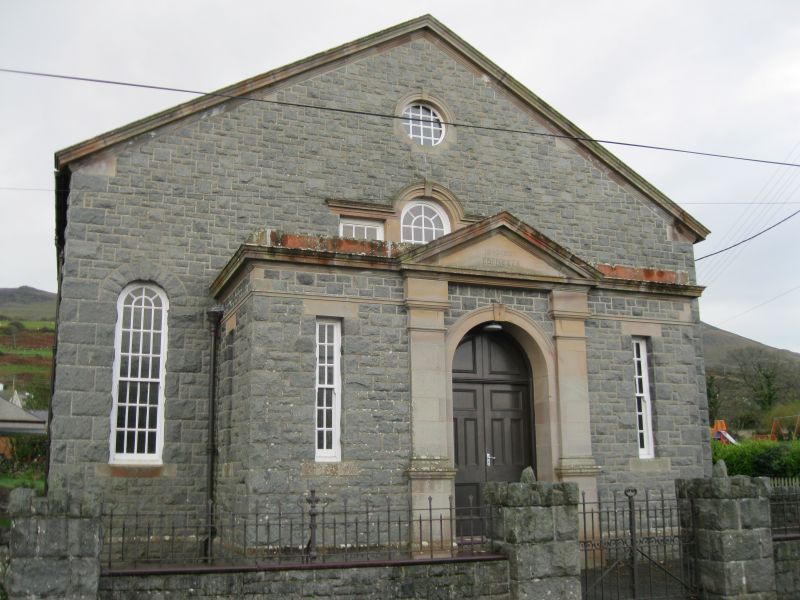 Location: The chapel lies on the back road from Clynnog to Llanllyfni, approximately 700m from its junction with the A499 just N of the village centre.

The Calvinistic Methodist chapel, Eglwys Ebenezer, was built in 1843, but remodelled or rebuilt in 1907, the date to which much of the interior fittings belong. Robert Roberts the quarryman became an influential preacher in the earlier Methodist chapel at Clynnog in the early C19, and later, Ebenezer Thomas, Eben Fardd, held a school at the chapel which was rebuilt in his time after he had rejoined the Methodist chapel.

The chapel is built of snecked squared granite, with a slate roof, set gable end to the road. In front a lower porch with ashlar stone parapet and a central gabled arch on sturdy pilasters in a Classical style. Panelled double doors, and narrow paned slit windows each side. In the gable end, set back above the porch, a stone Palladian window lighting the body of the chapel, and above, a circular window, the upper half architraved. The side elevation is of 4 window bays, extending back to the adjoining manse. 24-pane sash windows with arched heads, and a chamfered plinth.

Behind the facade there is a transverse lobby full width with two doors giving access to the two aisles of the chapel. The floor is slightly raked, with rendered and lined walls, and a boarded ceiling panelled in 12 bays with 2 ventilation roses. Boarded dado. The set fawr is defined by a panelled enclosure with a galleried top register and rounded corners. Within, cushioned benches around the raised pulpit with steps either side. Behind the pulpit a Classical reredos consisting of fluted Corinthian pilasters carrying an entablature and segmental pediment. Within the central arched feature a fan motif. To either side large brass lamps on brackets. The three banks of pews have a central division. A clock on the rear wall faces the preacher. All joinery is of ginger-stained pine. To the rear of the body of the chapel a small transverse vestry and Sunday school room which continues to the right as the manse.

Included as a well preserved chapel, part of an interesting group which includes the manse, the school, and the master's house, which together are of group value forming a cultural-architectural group with the chapel as its centrepiece, set a little outside the village centre.