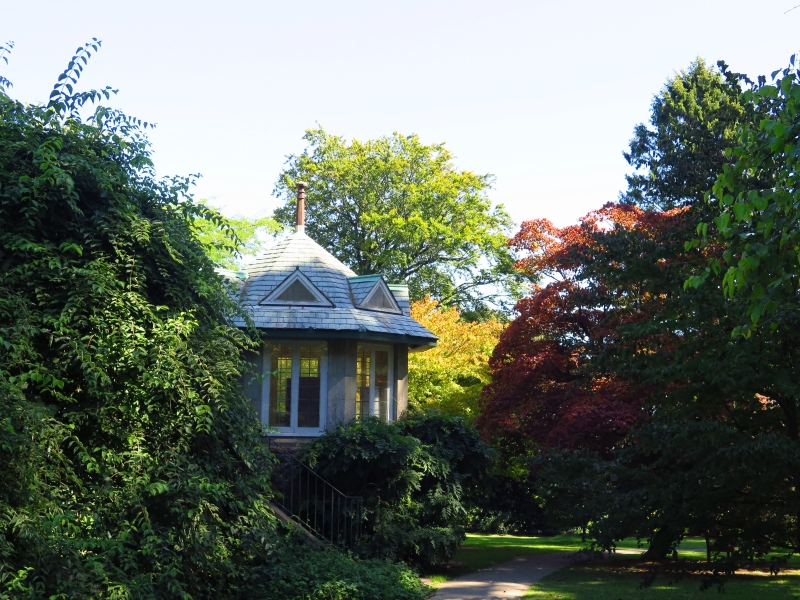 Location: In Clyne Gardens on the W side of Clyne Castle.

Clyne Castle was owned by the Vivian family, one of the most prominent of the Swansea industrial families, between 1860 and 1952. The first occupant, William Graham Vivian, focused his attentions on alterations to the house, and made a new entrance drive with lodge on the S side. Admiral Algernon Walker-Heneage-Vivian, who lived in the house between 1921 and 1952, extended the pleasure grounds in front of the house, where there are 3 National Collections of Rhododendrons and National Collections of Enkianthus and Pieris. The gazebo dates from this period. After his death in 1952 the house and grounds were sold to the Borough of Swansea, which opened the former pleasure grounds in 1954 as a pubic park, now known as Clyne Gardens.

An octagonal 2-storey gazebo, the lower storey of rubble stone with concrete dressings, the upper storey of coursed, fine-grained concrete. A slate pyramidal roof has triangular roof dormers and a moulded wooden pinnacle. The upper storey has 2-light wooden casements with moulded lintels and sills. The doorway is on the NW side and is reached by external concrete steps with plain railings and above a rubble stone wall. The plain door has been boarded over. The lower storey has a plain door on the SE side and a boarded-up casement on the NE side.

The roof has open struts and rafters and a central pendant.

Listed for group value with Clyne Castle and other associated listed items in Clyne Gardens.