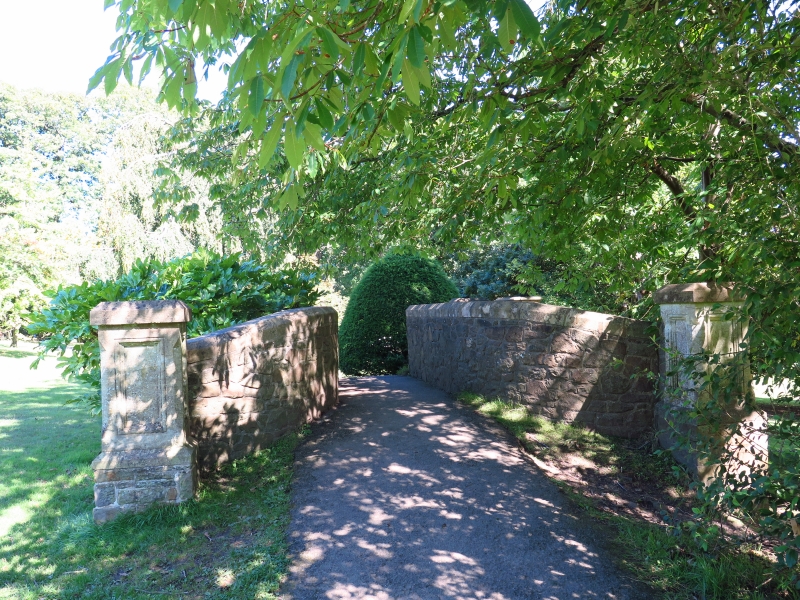 Location: In Clyne Gardens on the E side of Clyne Castle.

Clyne Castle was owned by the Vivian family, one of the most prominent of the Swansea industrial families, between 1860 and 1952. The first occupant, William Graham Vivian, focused his attentions on alterations to the house, and made a new entrance drive with lodge on the S side. Admiral Algernon Walker-Heneage-Vivian, who lived in the house between 1921 and 1952, extended the pleasure grounds in front of the house, where there are 3 National Collections of Rhododendrons and National Collections of Enkianthus and Pieris. The Italian bridge dates from this period and was part of the former Italian garden, a formal area below the S front of the house ornamented with running water. After Vivian's death in 1952 the house and grounds were sold to the Borough of Swansea, which opened the former pleasure grounds in 1954 as a pubic park, now known as Clyne Gardens.

A small single-span bridge of concrete and rubble stone. The abutments are curved outwards and terminate in square concrete piers with moulded panels and copings. The parapet has recessed panels and moulded coping. The ramped approaches lead to a flat deck.
Beneath the arch is a concrete-lined basin with moulded stone coping. On the downhill side is a rubble revetment and a rubble-stone freestanding pillar with moulded coping, probably intended for a statue.