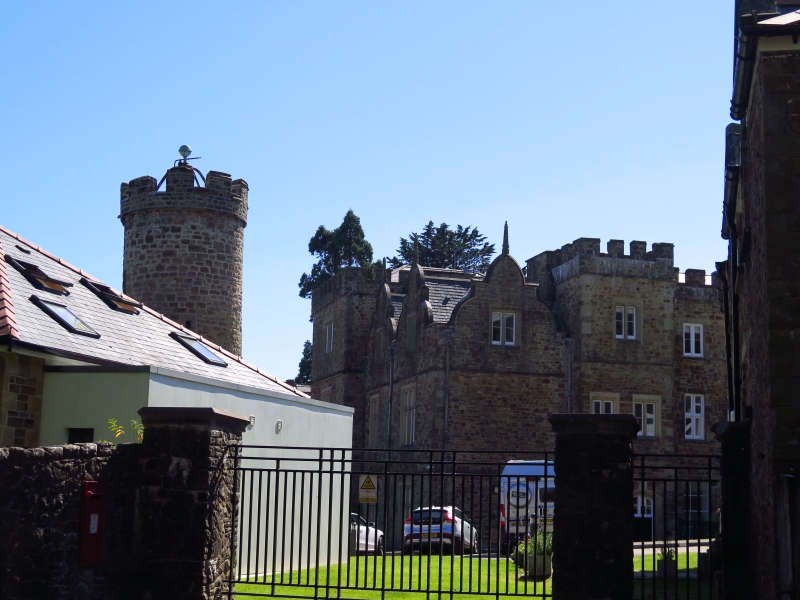 Location: On the NE side of the Clyne Castle

Built in the late C19 or early C20 and first shown on the 1918 Ordnance Survey map. Clyne Castle had been purchased by William Graham Vivian in 1860, one of the prominent Swansea family of industrialists. Vivian extensively remodelled the house and was probably responsible for building the clock tower in the service yard before his death in 1912. The house was subsequently inherited by Dulcie Charlotte Vivian, and then by Admiral Walker-Heneage-Vivian. On the latter's death in 1952 the Clyne Castle estate was purchased by the Borough of Swansea. The house and the grounds immediately adjacent were acquired by University College Swansea (1955), for use as student hall of residence.

A narrow round tower of rubble stone with an embattled parapet on a corbel table. A low doorway on the N side has a pointed head and a ribbed door. Above the doorway is a string course. The spiral stairs is lit by 3 narrow slit windows. The clock face, facing the yard to the N of the house, is black with gilded letters and is by Leroy & Son of London.

Included for group value with Clyne Castle and other associated listed items.