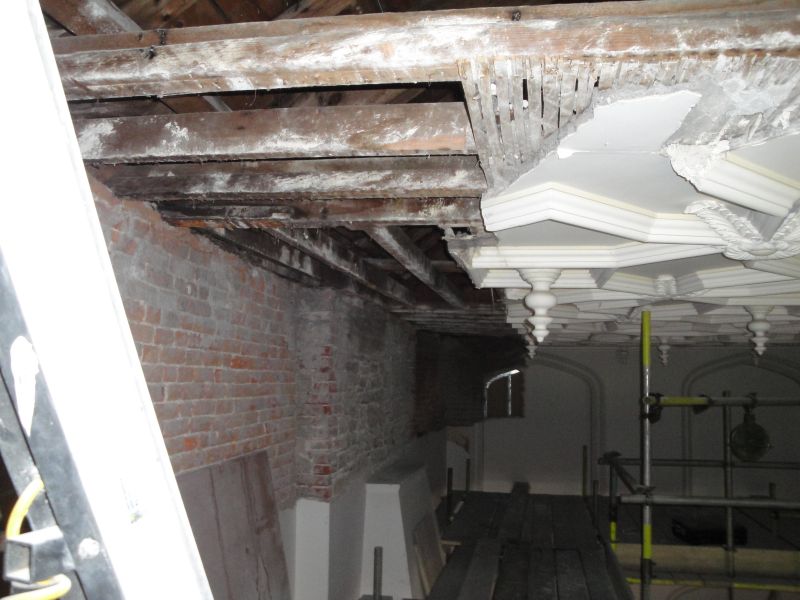 A house named Woodlands was built on the site in 1791, by an architect named Wyatt, for Richard Phillips. In 1799 it was bought by Colonel (later General) George Warde, who renamed it Woodlands Castle, and rebuilt in castellated Gothick style in 3 phases. The house was extended to the N c1800; in 1818 a domestic and office range was added (subsequently demolished during the Berrington period of ownership) and in 1819-20 the main S block was remodelled in Gothick style, perhaps with involvement of William Jernegan, architect. Between 1832 and 1860, the estate was owned by the Berrington family.
In 1860, the estate was purchased by William Graham Vivian (1827-1912) of the prominent Swansea family of industrialists, and was subsequently renamed Clyne Castle. Vivian greatly extended the house with a great hall and a large 3-storey N wing, in Tudor style, perhaps with the involvement of (Sir) Mathew Digby Wyatt. During this period the Gothick S front was altered to harmonise with the style of the N wing. Vivian brought in furnishings and fittings from palaces in Italy and France, dating from the C16 to the C18.
The house was inherited in 1912 by Dulcie Charlotte Vivian, and subsequently by Admiral Walker-Heneage-Vivian. On the latter's death in 1952 the Clyne Castle estate was purchased by the Borough of Swansea. The house and the grounds immediately adjacent were acquired by University College Swansea (1955), for use as student hall of residence. The building opened as Neuadd Gilbertson in 1956.

The present house is in 2 main phases, comprising a long 2-storey S front of rubble stone, principally the work of Warde, behind which is a 3-storey N block of snecked, rock-faced stone with Forest of Dean dressings and concrete tile roofs, added by Vivian in 1860s. Mullioned and transomed windows are used throughout except for the service areas.
The S block is of c1820 with fenestration of the 1860s when the entrance was moved. Its S front is convex and castellated on a corbel table. It has higher round end turrets, 2-storey bay windows to the end bays, then higher polygonal turrets with blind slits, with narrower windows flanking the central bay. To the centre is a projecting, higher bay of coursed rubble, which has a 3-light ground floor window, a string course between storeys and a cross window above. The E front of the S block has a wide 4-window bay with splayed ends projecting in the centre, in which a former round-headed doorway is made into a niche with aedicule and is flanked by windows. The upper storey also has cross windows. Set back on the L side is a polygonal turret, then a segmental-headed sash to each storey. On the R side of the central bay is another polygonal turret set back, then a cross window above a ribbed door and overlight in a moulded surround. This is now the main entrance to the house.
On the R of the main entrance is a projecting 1-bay, 3-storey wing with castellated parapet, and a round turret in the inner angle on the L side. It has mullioned and transomed windows in each storey and in the S return wall. Set back to the R are 2 further bays of the N block but lower, each with shaped gables and mullioned and transomed windows.
The N front continues in the castellated style. It has a bay set back to the L with a shaped gable and a higher projecting tower to its R which has a ribbed and boarded door under an overlight. Further R are cross windows, 2-light casements and pointed sash windows of the service end of the house. Set back from the R end is an added rock-faced external stack. The 3-window W elevation has stone steps up to a central doorway which has a half-lit door and mullioned overlight. The windows are 2-light, except the lower R which is 3-light. To the S of this is a courtyard with a mixture of mullioned and sash windows, at the S end of which is the great hall with a large 4-light mullioned and transomed W window. A doorway is inserted immediately to the R of the hall and further R is the rounded end of the S block, which retains a single Gothick window from the 1820s fenestration. On the L (W) side of the S block is a Gothic screen wall with doorway flanked by windows, on the site of a former conservatory.

The entrance lobby has a ribbed plaster ceiling and classicising door architraves. To the R is the dining room. This has an elaborate C17-style plaster ceiling, which is ribbed with pendants and is said to be based on ceilings at Knole House, Sevenoaks. The W angles of the room have oak niches, while wooden double-leaf doors from the lobby and their architrave have floral carvings and wooden dado panelling. The doors, niches, and dado are said to have come from the Palace of the Archbishop of Paris, Ile St Louis.
To the L of the lobby is a corridor leading to the double-height great hall. The hall is entered through 3 Tudor arches. The elaborate plaster ceiling of the hall is also said to be based on Knole House. It has polygonal ribs and pendant and floral bosses. Above the entrance arches are 3 Tudor arches to a gallery. The S wall is splayed to accommodate the staircase behind it and was previously an external wall before Vivian built the great hall. At 1st-floor level are 3 glazed Tudor arches. In the N wall is an elaborate Italian fireplace, possibly C16, in Rosso di Verona marble. It is approximately 2.5m high to the cornice and supported on volute brackets, while the opening and surround are inset with Sevillian tiles in geometric designs. The hood and heraldic shield above are modern. To the S of the hall is the main stair hall. This has a wooden staircase with Gothic pierced balusters. Two doors to the drawing room (now the library) have elaborate Italian marble doorcases, possibly C18, in polychrome marble, each with a scrolled pediment and urn above putti heads and drapery swags. The doors are panelled. The drawing room (now library) occupies the full width of the convex S front. It has a squarish central section with Tudor aches leading to long symmetrical flanking sections. The fine plaster ceiling, again modelled on Knole, has undulating ribs with floral decoration defining fields with naturalistic ferns, leaves etc. Each of the flanking sections has an early C19 style classical doorcase with fluted pilasters, cornice and a frieze with swags, urns and paterae. Classicising mouldings to skirtings, panelled shutters to windows. Each of the flanking sections has a marble fireplace, on the W side with tiles, with cast-iron firebacks.
The 1st floor of the S wing has doorcases with classicising architraves and panelled doors. The bedrooms retain simple cornices. The 1st floor of the N wing has simpler mid 19 detailing, while many of the bedrooms retain simple cornices.