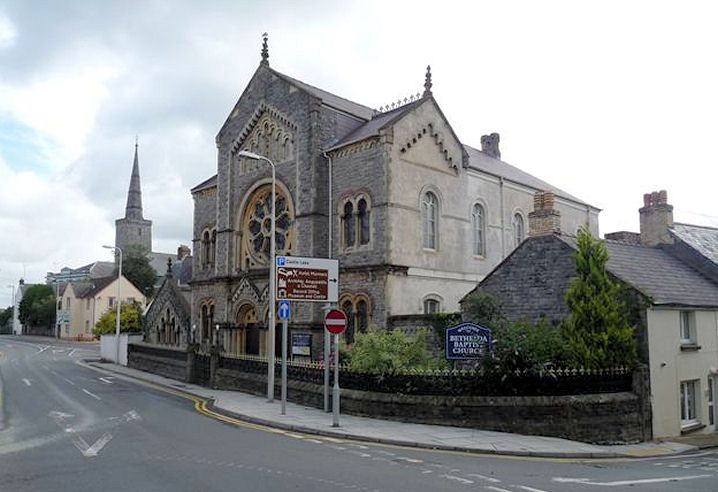 Location: Situated near the centre of Haverfordwest, on the E side of Barn Street near its junction with City Road and Perrots Road.

Baptist chapel of 1878 by George Morgan, possibly the finest of his Italian Romanesque works and the centre piece of an extraordinary few years in which he introduced the style to Wales. Priory Chapel Carmarthen of 1875, Salem, Ferryside of 1877, Frogmore Street, Abergavenny of 1877, Bethesda, Haverfordwest of 1878, Ebenezer Port Talbot of 1880 and Dinas Noddfa, Swansea of 1884 are the major works. This chapel cost £2,199. The gallery ironwork also appears in two Baptist chapels of the later 1870s by the Rev H Thomas, Adulam, Felinfoel, Llanelli, and Caersalem Newydd, Treboeth, Swansea. The carved stonework is by E Powell of Abergavenny, the coloured glass by Cox & Son. The chapel replaces one of 1789 rebuilt in 1816 using old site and part of old walls.

Chapel, rock-faced grey limestone with extensive Bath stone ashlar dressings, slate roofs and coped gables with stone finials. Large Romanesque winged gable facade. Advanced centre with wings gabled on the side walls. Two-storey design, the low ground floor under a big stringcourse with zigzag moulding right across. Centre is framed by piers with ashlar quoins that rise right up to stepped corbelling following the gable line. Below the corbelling a stepped small arcade of 7 blank panels. Pierced ashlar infill only to the tallest centre panel, 6 column shafts and a hoodmould following the stepped arches. This is over the very large main rose window, an exceptional design, a Gothic octofoil with shaft-ribs, trefoil cusping and pierced spandrels below. Ashlar over-arch on ashlar column shafts and red sandstone voussoirs above the hoodmould. The hoodmould links to a string course across to the hoodmoulds of a pair of arched windows in each wing, with 3 column shafts, stilted heads and red voussoirs. The wings have ashlar quoins and ashlar eaves corbelling. The ground floor centre has a pair of ornate gabled doorways with corbelled coped gables and richly carved Romanesque arches on fat angle shafts, paired with central shaft and side shafts, all with florid carved capitals. The carving of the capitals is continued as a band across to the outer edge of the centre bay. Within the arches, double doors with shouldered heads and ashlar tympana each pierced with 3 sexfoils. The wings have each a similar ground floor 2-light window to those above, but with only one column shaft, between the lights.
The side walls are 5-window, rendered, with the gable of the wings over nearest bay. Cambered headed windows below, raised band, arched windows above, and string course linking the upper hoodmoulds. The rear has a shallow 3-sided projection for the pulpit, 2-3-2 light arched windows and coped gable with paired ashlar chimney shafts.
Attached to the front facade right is a screen wall with corbelling and shouldered-headed door linking to the stone-clad end gable of the house in the adjoining street. To the left is N gable end of attached parallel vestry with shafted stepped 5-light window, the walling recessed under stepped gable corbelling. Ornate finial. Vestry has punched rose window to S with red stone voussoirs, gable-end chimney and glazed lantern on ridge. Entry is from side street at an angle. Coped stone wall with arched window each side of cambered-headed panelled door, with red stone voussoirs. Ashlar scalloped cornice. To left, elders' room projection from chapel with 2 arched windows in rendered wall with parapet. Canted-hipped slate roof behind. Rendered wall is ramped down and continued around rear of chapel.

Graded II* as the major work in Romanesque style of an outstanding Welsh chapel architect with complete interior.