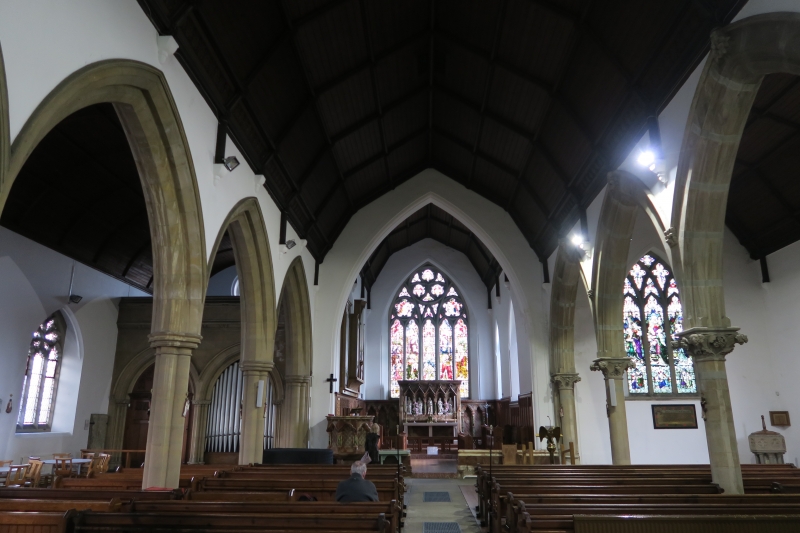 Location: Located in a quadrangular churchyard, encircled by the high-level A48. Just to the S of Aberavon shopping centre.

The church is of medieval origin, first mentioned in 1254, and shown in much later drawings with Tudor-style windows. It was rebuilt on the same site in 1858-9 by Prichard & Seddon. One of the medieval windows was reset into the N aisle, but the arrangement of tracery is not original. A C12 piscina, thought to be from the site of a nearby chapel, was inserted into the chancel in 1927. The top stage of the tower was probably added or altered c1870, while the N aisle is an addition of 1898 by G E Halliday.

Gothic style with geometrical tracery. SW tower, nave, chancel, S aisle, S porch, N aisle and N vestry. The N and S aisles are both gabled ranges. Constructed of snecked pennant sandstone, mainly rock-faced, under slate roofs with mixed Bath stone and grey stone dressings. Pointed arched windows, the lights with trefoiled heads. Tall prominent tower with pronounced Bath stone quoins. The NW and SE angles of the tower have dressed angle buttresses with offsets. The W face, which is aligned with the W end of the nave, has a 2-light pointed arched window with grey and pale stone dressings. Geometrical tracery above the trefoiled lights including a cinquefoil. To the upper level are pointed-arched louvre openings with Bath stone dressings to each face, all under a continuous hoodmould. These are 2-light with a transom and geometrical tracery above. Battlemented parapets on corbel table, with dressed cross motif in centre of each side. Octagonal stair turret to SW angle, on a square base with broach stops, and with string course to top of base. The turret rises above the parapets in dressed stone, and is surmounted by a spirelet. Narrow flat-headed stairlights at intervals, and lancets to dressed stone section.

The W end is 2-gable with an angle buttress between the nave and N aisle. The nave has a large 4-light W window, with 3 large cinquefoils above the trefoil-headed lights. Continuous sill band, beneath which is a pointed arched doorway under a hoodmould with decorative bosses and containing double planked doors. The aisle has two 2-light windows with a cinquefoil under the arch to the L and a trefoil to the R. Sill band with decorative end stops. Cusped oval light in gable.

The S side of the S aisle has an advanced gabled porch to the L and pointed arched windows to the centre and R. The porch has dressed quoins and angle buttresses facing E and W. Moulded pointed arched entrance with pale and grey stone dressings, and hoodmould with end bosses in the form of male and female heads. Single light to each side of porch with trefoiled head. Inside the porch, the roof has closely-spaced intersecting braces and a flagstone floor. Pointed arched doorway with hoodmould containing a planked door. The aisle windows are 2-light with a cinquefoil above to the L and an octafoil to the R. They contain stained glass. Three-light window to E end of S aisle, with cusped intersecting tracery. Dressed quoins to SE angle.

The chancel projects beyond the S aisle and has a 2-light window to the L and a single light to the R. The former has 3 circular cusped lights below the arch, the latter has a trefoil. Continuous sill band continuing round to E end. Large 5-light E window, highly decorated, with a large circle under the arch and further circular cusped lights. Angle buttress to SE angle pointing S, and another to R, between chancel and vestry. The vestry is a lean-to against the N side of the chancel, and has a trefoiled lancet with hoodmould to the E end. Late C20 planked door to N side with chamfered pointed arched head, the masonry possibly reused. Stack with dressed quoins behind E end of N aisle. The E gable of the N aisle has a large cusped wheel window with stained glass. The N side of the N aisle is in a slightly different style, with plain quoins and moulded eaves. Three tall windows towards the centre, separated and flanked by stepped angle buttresses, that to the L higher. Each window is 3-light with cinquefoiled heads, and with cusped decorated tracery above. To the L is a pointed arched doorway with hoodmould containing a planked door. Three-light window to its L with flat head. Shorter blocked window to R of the central windows, with chamfered arched head, a diagonally-set mullion, and hoodmould with head end stops. This tracery appears to have been reused from the earlier church.

No access to interior at time of inspection. The S arcade, by Prichard & Seddon, is said to be in late C12 French style with foliage capitals. An altar table in the S aisle is dated 1704, whilst the alabaster reredos with green marble shafts is by Kempson & Fowler, 1890, with figures of Christ and the 4 Evangelists by H H Armstead. Stained glass windows, including Adoration of the Boy Christ to the E window, in Germanic Gothic style by Dixon's, London. This window, the pulpit and reredos were gifts of Mrs Llewellyn of Baglan Hall.

Listed as an ambitious Gothic Revival church of the late Victorian period; the fine, prominent tower and varied window detail are of particular interest.