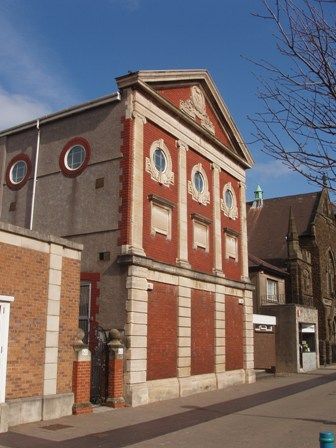 The first lodge in Aberavon was held at the Walnut Tree Hotel in 1861. It was begun by Theodore Talbot of Margam Park who had previously joined a lodge in London. The temple was built in 1909 with money provided by Emily Charlotte Talbot, sister of Theodore. The builder is thought to have been Morgan Cox, a master of the lodge in 1902 and 1917.

Classical-style temple. Two-storey range with tall narrow gable end facade, entrance to W side and late C20 additions to E side. The facade is 3-bay with a triangular pediment and is constructed of red brick with pronounced pale stone dressings. The lower storey has wide rusticated quoins and pilasters rising from a dressed plinth. Moulded string course between storeys, supporting 4 tapering Ionic pilasters dividing the bays and supporting an entablature. Each bay contains an oculus in a moulded stone surround, with keystones above and below. The latter are set within panels with foliate decoration and ears. Underneath each oculus is a square stone tablet in a frame, with moulded cornice and 2 dentilled corbels. The triangular pediment is heavily moulded and dentilled. Within it is a large stone masonic emblem, circular with scrolls and bearing the square and compass motif. Attached beneath are 3 foliate bands with stylised writing, reading 'Afan / Masonic / Temple'.

The sides of the temple are roughcast. To the upper storey are 5 oculi within red brick surrounds, and vertical and horizontal glazing bars. Beneath the oculi to the S side are tall windows with segmental heads and red brick surrounds containing UPVC glazing. At the L end, in place of a window, is a small porch with late C20 door facing S with an overlight and high segmental head. UPVC window above. The N side is partly obscured by late C20 additions, most of which have flat roofs. The rear is roughcast with similar windows, 3 to the lower storey and 2 above. Late C20 gabled range adjoining to N. One window to rear side of entrance bay.

The porch leads to a round arched doorway into the W side of the building. This has a half-lit panelled door, matching side lights and a high overlight, all with Art Nouveau glass. Inside is a stairhall with dog-leg stairs in the SE corner, with flat openwork balusters and tapering square-section newel posts with recessed panels. The newels are decorated with square and compass motifs and have domed heads. From the stairhall, the dining hall is to the R, 2 small rooms to the L and service areas straight ahead. The dining hall is 5-bay with flat moulded cross beams and ceiling roses with reeded mouldings. Dado rail, picture rail and panelled doors throughout.

Upstairs, the temple is above the dining hall. Large round-arched recess to N end with pilasters, moulded arch and scrolled keystone. The recess contains a pipe organ fronted by flat timber balustrading. The organ is raised and reached by curved stairs to the E side. In front of the organ is a wood panelled pedestal in front of a seat. At the opposite (S) end is a similar pedestal in front of the Master's chair. Between the pedestals, towards the N end are 2 round tapering columns of brown marble with fluted bowl capitals with beading. These support globes. The walls are half panelled, to door shoulder height. Deep moulded coving with decorative frieze; plaster moulding to ceiling decorated with flowers and saltire crosses. Blocked wooden fireplaces to each side of temple in classical style. Towards the S end are opposing round-arched recesses at a high level containing busts. Stained glass to oculi bearing small masonic motifs.

Further rooms lead R from the landing, including a committee room with half-lit door and overlight with Art Nouveau glass, and moulded coving. The coffee room has a large black and green marble fireplace to the E, supporting a wooden canopy with scrolls in relief flanked by costumed soldiers.

Listed for its fine late classical facade and unaltered interior, a rare building type in Wales.