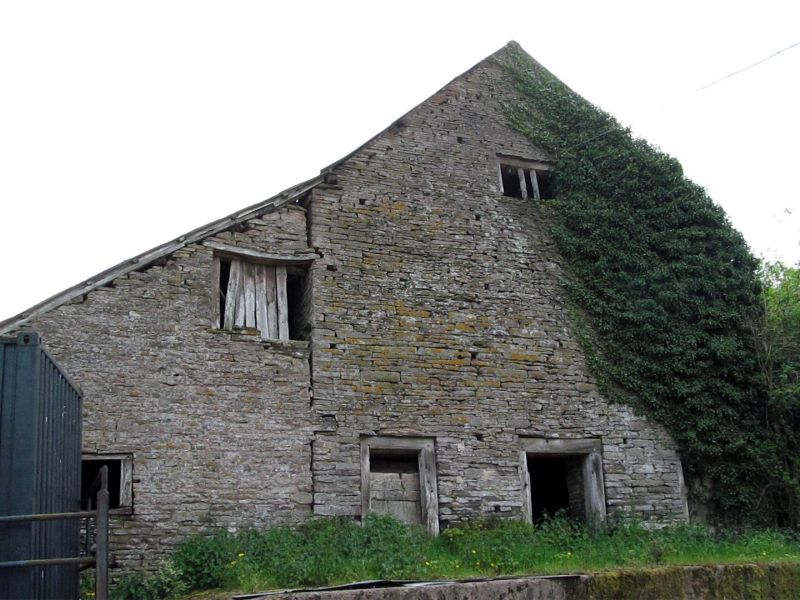 Location: Some 400m SE of Grosmont village, S of the road junction to Middle Tresenny.

A multiphase building with complex history. Fox and Raglan suggest that the oldest part of the house is the centre block, and that the two-unit parlour wing to W was added in the late C16. The W front of this parlour block originally faced towards the farmyard, but the entrance doorway was later blocked. The large E wing with service room and workshop is probably early C17, and may once have been an independent building. In the late C17 the front of the house was turned to face the roadway and refenestrated with mullion and transom windows. There have been C20 changes but the interior retains a strong historic character with several features of interest.

Painted rubble stone, slate roof and brick stacks. N front faces road; to left is gable of early C17 wing and to right gable of late C16 parlour wing. Parlour wing, gable head has two C20 6-pane fixed lights in segmental arched openings and C17 6-pane casement below. Set back (to left) main wall house is two storey with lower roof. Ground floor (right to left) has round-arched entrance doorway with projecting keystone, C20 transom with cambered stone voussoirs on ground floor, and first floor a C19 2 2 pane casement. The facade is broken by a build line at this point; beyond (to left) the eaves of the roof are lower with 2 2 pane casements on ground-floor. Left gable has a sculptured stone mask under dripstone in gable head and a 6-light diamond mullion on the first floor. The W front of the parlour block faces the farmyard; the former centre entrance doorway is now blocked. Both first-floor windows have deep timber lintels and thin stone sills; C20 windows. Ground-floor left has early C19 bay window with canted sides and centre metal casement. Garden elevation has gable of late C16 house (left), with C20 6-pane window to attic, C20 transom on first floor, and boarded door and 3-light diamond mullion in chamfered frame on ground floor. Back of main house (right) has C20 transom on first floor and C19 6 6 pane casement on ground floor. Further right early C17 house has two boarded doors, two C20 windows, and C17 3-light diamond mullion with wooden stanchions. E elevation partly derelict, but has 8-light mullions on first and ground floors of gable; further right is a 3-light mullion in the middle wall and 4-light mullion with iron stanchions on ground floor.

Late C16 parlour wing W entry now blocked but originally opened into stone flagged cross passage with parlour (to left) and partitioned service rooms (to right). Mortices in the headbeams either side of the passage indicate the position of former post and panel partitions. Tudor arched doorway to pantry. Both service rooms have chamfered beams with hollow and fillet ('Wern-hir') stops and joists with a roll moulding at the angles. Parlour has ornate ceiling beams with centre hollow and quarter rounds each side; converging stops. Massive Tudor arched wooden lintel to parlour fireplace and blocked fireplace stair (to right). On first floor, the best chamber has ornate ceiling beams similar to the parlour, elsewhere chamferd beams with 'Wern-hir' stops. Attic stair has C16 plank and batten door. Attic of four bays, roof trusses originally had collars. Repositioned against the living room wall is post-and-panel partition. E end of house is much altered. Chamfered beams with straight-cut stops to the downstairs kitchen. Tudor arched doorway on the floor above. Derelict and floorless two-storey workshop is without a chimney.