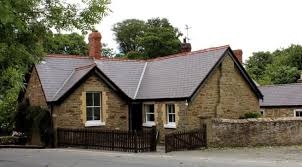 Location: Immediately SE of the churchyard and facing S to the main entrance drive to Gyrn Castle.

Old Gyrn Arms was built in 1675 but was remodelled in the C19 when it was a part of the Gyrn Castle Estate. On its rear, uphill side, West Lodge was incorporated into the earlier building and faced the W entrance to Gyrn Castle. Gyrn Castle was rebuilt in 1817-24 by John Douglas, a Holywell cotton manufacturer and West Lodge is shown on the 1839 Tithe map. West Lodge was originally probably similar to South Lodge at the opposite entrance to Gyrn Castle but was altered in the late C19 by adding a wing and inserting new windows with yellow-brick dressings.

Listed, with Old Gyrn Arms, for its contribution to the historic character of Llanasa.